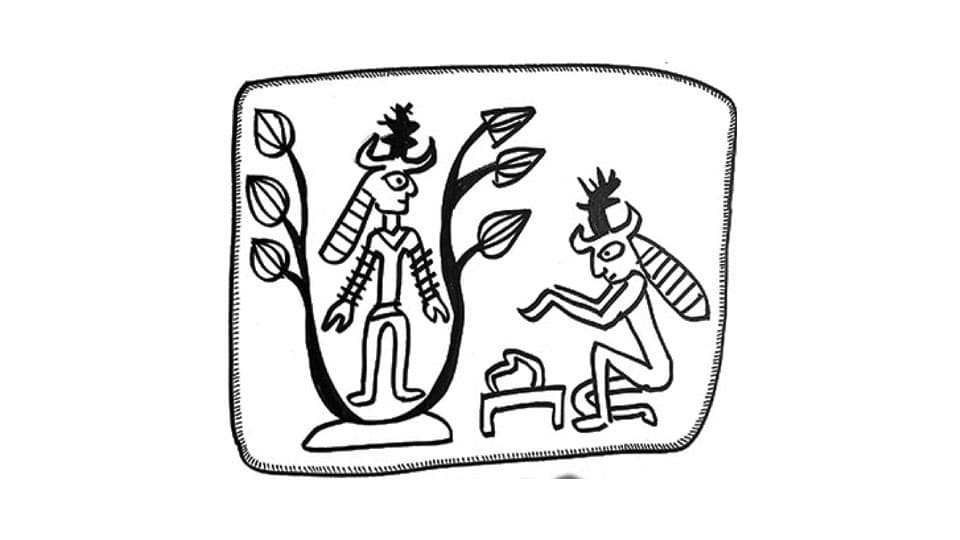 One seal shows the reason why this may be important. There is an image of a tiger looking back at a man who is seated on top of a tree. So, by hiding on top of the tree, the man saves himself from the tiger. This could be the reason why the tree, or the sacred orchard of thorny trees, then become the refuge of man from the wild tiger. Therefore, it is associated with the Mother Goddess.

This belief of sacred groves and their branches and thorns protecting humans from wild animals is featured a lot in contemporary tribal mythology too. Amongst Mundas, there is a story of a man who hid in a grove and was saved from a lion. The practice of worshipping trees continues across  India in many communities even today.

Many tribes have sacred groves with trees like the Sal, the Mahua, the Neem and the Banyan that no one is allowed to encroach. The logical explanation for the existence of these sacred groves is that they maintained the biodiversity of the land. The farming communities do not encroach on this particular stretch of property. The sacred grove is called Sarna-sthals among Bhils.

It is said that the Goddess resides on sacred trees, or in sacred orchards, and plays on the swing with her companions. Men who enter this grove, become women. Male animals became female animals. A horse turns into a mare; a lion into a lioness. Therefore, one must stay away from it.

Many communities in Jharkhand, for example, are demanding that “Sarnaism” or worship of trees and sacred groves be distinguished from the overarching all-absorbing framework of Hinduism.

Vedic scriptures also refer to the trees from the Indian subcontinent such as the peepal tree, the banyan tree and the babool tree. This is a reminder that the Vedic hymns were composed in India. Since the culture came after the collapse of the Harappan civilisation, it shows the hymns were the result of the mixing of immigrating Indo-Aryans with residents of the earlier Harappan cities. Therefore, memories of Harappa are bound to be located in the Vedic hymns. This memory manifests in the celebration of native flora.