Home » News » ‘Save the Sparrow’ campaign launched in city 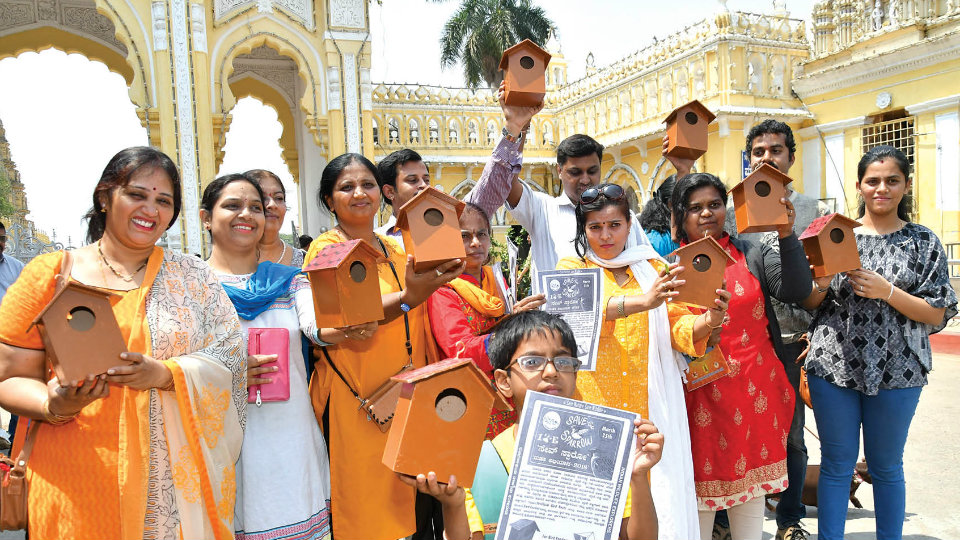 ‘Save the Sparrow’ campaign launched in city

Mysuru:  ‘Save the Sparrow,’ a State-wide campaign to inspire people to make more efforts to bring back the humble Sparrow, which were once found in large numbers in urban places, was launched in front of Kote Anjaneyaswamy Temple at the North Gate of the Mysore Place here this morning.

The campaign was launched by like-minded people, who also distributed about 200 artificial bird nests made of wood and grain packets to those interested to be put up at their houses.

Speaking on the occasion, Bhagyalakshmi, a wildlife conservationist, said that the population of Sparrows which were once found in large numbers had declined rapidly due to various reasons and mainly because of lack of nesting places following urbanisation where trees are chopped down by various authorities citing developments.

One of the organisers said that the idea was to earmark a day for the House Sparrow to spread the message of conservation and mark a day to appreciate the beauty of common biodiversity which is generally taken for granted and added that the easiest thing one can do is to put bird feeders outside their houses. Water feeders and bowls will help the birds re-hydrate, she said.

The organiser said that Sparrows can live anywhere even in bus stands, Railway Stations, gardens, schools and parks and added that they (Sparrow) are known to live in colonies and survive on food grains and tiny worms besides stating that they want to bring the Sparrows back to the city which is still green when compared to other cities.

The organisers will take down the addresses of people who have taken the artificial nest and volunteers will visit their places once in two months so that the nest and feeder are put to use and not kept as show pieces.