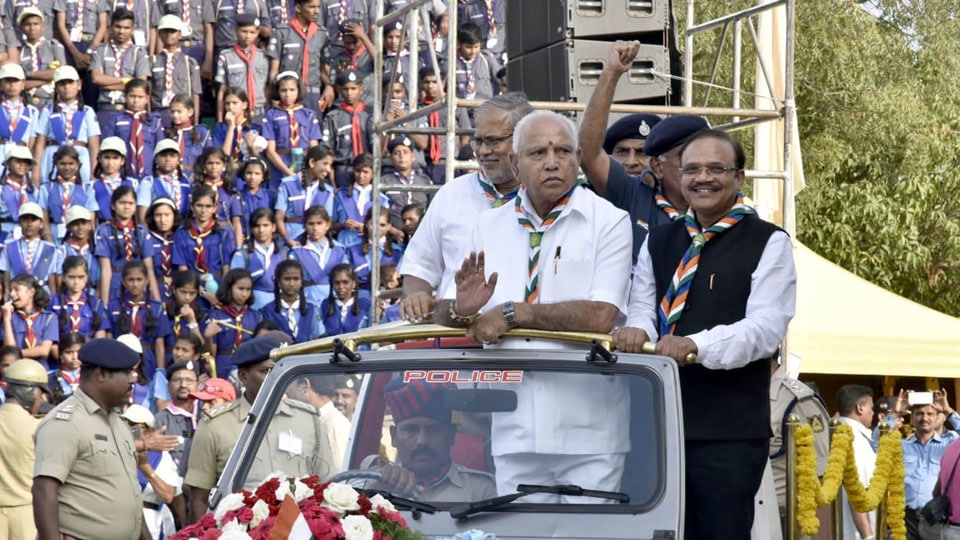 Scouts and Guides training centres to get Rs.10 crore: CM

Bengaluru: Maintaining that the State Government was willing to extend all help to Scouts and Guides, Chief Minister B.S. Yediyurappa said that Rs.10 crore will be released for the development of Scouts and Guides training centres at Doddaballapur, Davanagere and Udupi.

He was speaking after inaugurating the week-long 28th State-level Scouts and Guides Jamboorette organised at Dr. Annie Besant Scouts and Guides State Training Centre at Doddaballapur in Bengaluru Rural district on Friday.

Noting that the Jamboorette has gained popularity over the years, Yediyurappa said that ‘Young India’ of the future should blossom on the lines of Prime Minister Narendra Modi’s thinking of service-mindedness and dedication and determination.

Pointing out that this Jamboorette assumes significance as it is being held marking the 150th birth anniversary of Mahatma Gandhi, he said that the event should become a platform for making a pledge to fight subversive activities and to create an atmosphere of peace and harmony in the country.

Recalling that the Scouts and Guides Movement has a century-old history, the CM said that national and social spirit, adventurism, sportsmanship, service mindedness, leadership qualities, life-skills, etc. are key for building a strong youth force in the country, which is the purpose of Jamboorette.

A special stamp on Jamboorette was released on the occasion.

Yediyurappa received the guard of honour from the participants, who took out a march-past.

About 4,000 students and 1,000 teachers from all districts of the State are taking part in this week-long event. Students and teachers from neighbouring Telangana and Andhra Pradesh took part as invitees.