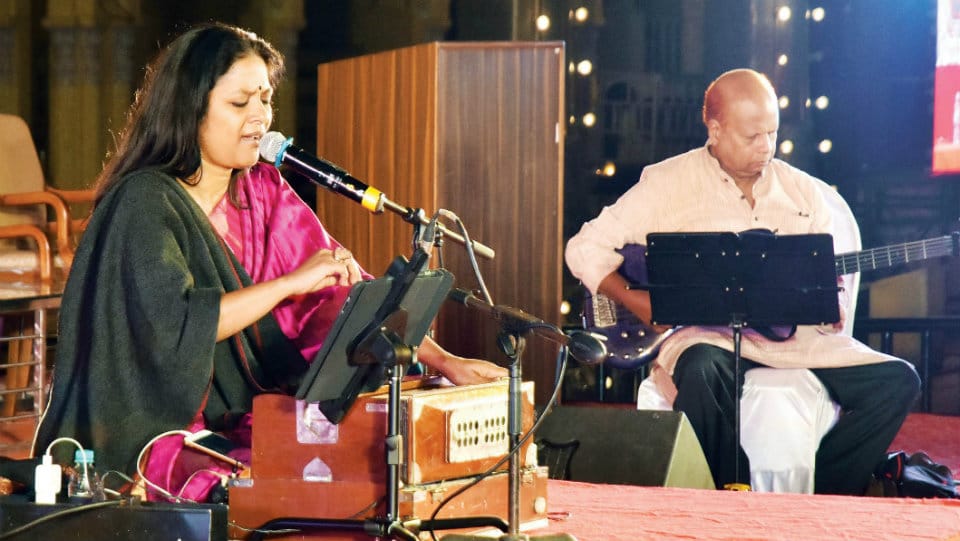 Soulful rendering by Pallavi and troupe

Mysuru: Kannada playback singer and theatre personality M.D. Pallavi and troupe entertained the gathering at the Flower Show venue in Mysore Palace premises yesterday, with their soulful rendering of Kannada Bhavageete (poetry and light music). The event was organised as part of the ongoing Winter Festival in city.

While Pallavi rendered each song with soft and rich tonal variations, very apt orchestral support was given by Shabir Ahmad and Srikrishna Udupa on keyboard, Ramesh on flute, Pradyumna on tabla and Shekhar on dolak.

Deputy Director of Mysore Palace Board T.S. Subramanya, Treasurer Samiulla, ACP Chandrashekar and others were present.

As the Government has announced three-day State mourning following the demise of Pejawar Seer Sri Vishvesha Theertha Swamiji, the cultural events organised at the Mysore Palace premises as part of the ongoing Winter Festival today and tomorrow have been postponed to Jan.1 and 2.

However, Flower Show at the Palace is open for public but there will be no illumination of the Palace on Dec.29 and 30.