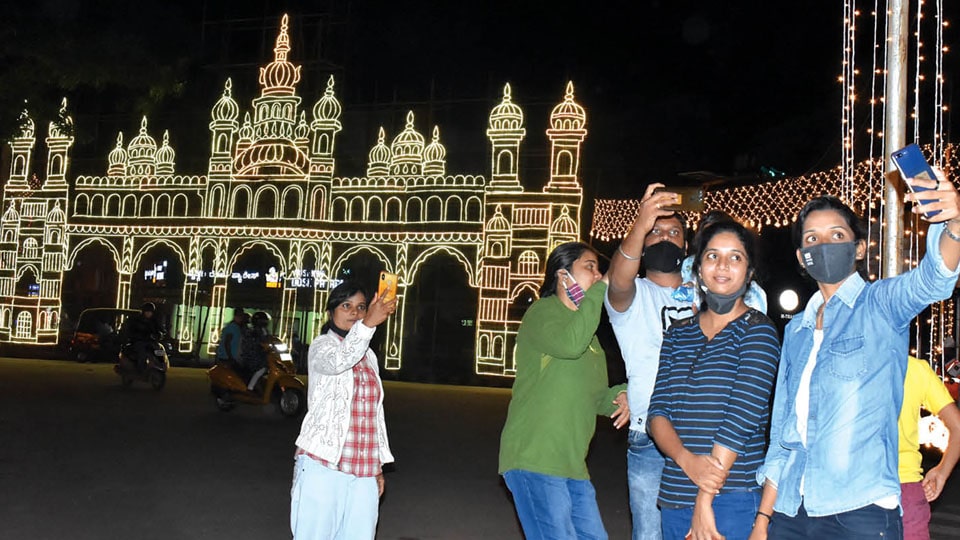 Mysore/Mysuru: Crowding of people at various illumination spots in the city has become a big headache for the authorities concerned in the wake of COVID-19.

When the illumination was done on a trial basis on Sunday, hundreds of people gathered at the illuminated spots to take selfies in mobile phones with their friends and families.

This had created traffic congestion in Central Business District (CBD) area for some time. Last week, Co-operation and District Minister S.T. Somashekar had strictly told City Police Commissioner Dr. Chandragupta to ban parking in the heart of the city during ten-day Dasara to prevent spreading of pandemic.

Even a three-member Technical Team, headed by Dr. M.K. Sudarshan, had recommended to the State Government to station the Cops at the illuminated circles, junctions and main roads to check people from gathering and spread virus to others. The crowds were witnessed at Ramaswamy Circle, JSS Mahavidyapeetha Circle, Hardinge Circle (Jayachamaraja Circle) yesterday taking selfies. If this was the attitude of people before ‘Nada Habba,’ one can imagine how their attitude will be during the ten-day festivities, a CESC official noted.

The officer said, managing the crowd has become a biggest problem for them as people do not listen to them despite reminding them of spike in Corona positive cases in city. It will be hard to imagine in case the cases go up during Dasara.

The Police Department must discipline the crowd by not allowing them to gather in groups near the illuminated spots and also make them to wear face masks and maintain social distance.

“As Dasara will be celebrated in a simple manner this year, no sponsors have been approached. CESC, through 40 contractors, is illuminating the city for the festival,” said CESC Superintending Engineer Munigopalaraju.