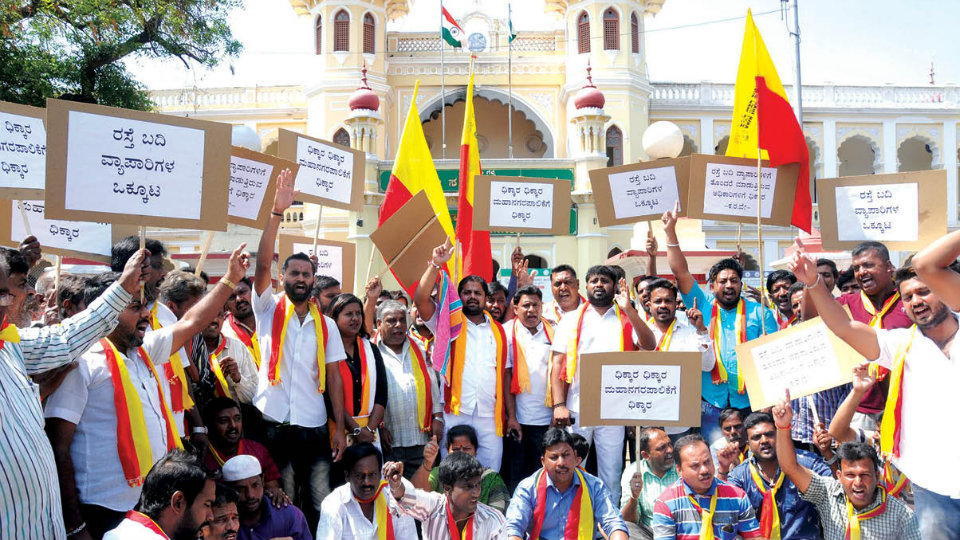 Series of protests held in Mysuru

The members of Karnataka Rakshana Vedike( KRV) staged a protest outside the Office of Mysuru City Corporation (MCC), condemning the civic authority’s footpath clearance drive on Shivaji Road in N.R. Mohalla and forcefully removing shops on roadsides without giving prior intimation and making alternate arrangements.

They alleged that the livelihood of the footpath vendors has been affected by the MCC’s sudden drive. KRV District Unit President Praveen Kumar, activists Hemanth, Lokesh, Sunand, Rafeeq, Aslam, Afroz, Madhu and others were present.

In another protest, villagers of Kothavalli in Periyapatna taluk staged a demonstration under the banner of Karnataka State Sugarcane Growers Association, near DC’s office condemning the delay in the distribution of compensation for the land losers whose lands were acquired by the Irrigation Department for Karadilakkanakere Lift Irrigation Project.

They alleged that the land of 80 farmers were acquired in 2008, but the authorities had not distributed the compensation even after 11 years.