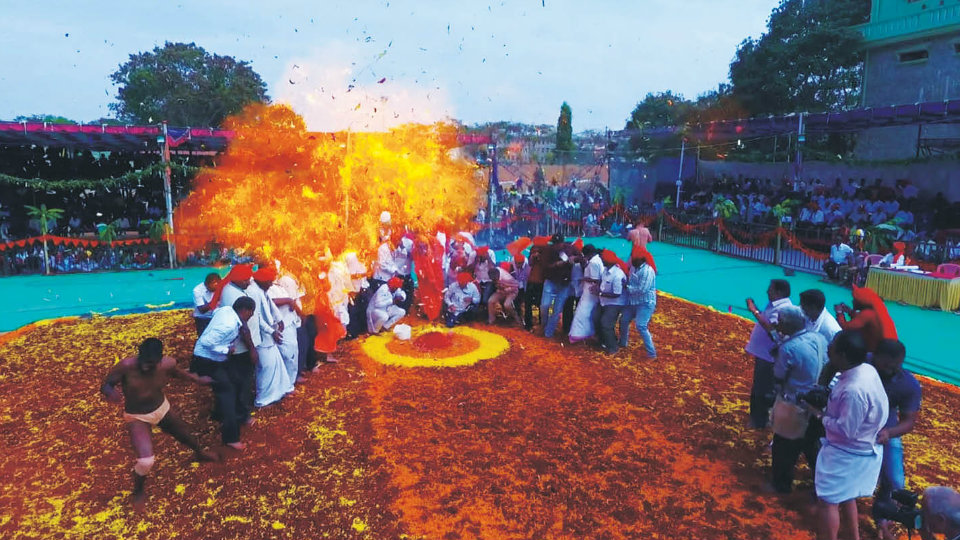 Mysuru: As many as seven people, including MLC Marithibbegowda, were injured while Sri Shivarathri Deshikendra Swamiji of Suttur Mutt escaped unhurt, when gas-filled balloons exploded during inauguration of wrestling competition during the annual Suttur Fair yesterday.

The incident took place during the inaugural ceremony of the Wrestling Tournament, held as part of fifth day of the annual six-day Suttur Shivarathreeshwara Shivayogigala Jathra Mahotsava, popularly known as ‘Suttur Jathra’ or ‘Suttur Fair’ held on the banks of Kapila River in Nanjangud taluk, about 28 km from here.

Five bunches of balloons, filled with gas, were held up by the organisers to be released to mark the inauguration of the wrestling tournament. They exploded as the flames of the sports torch touched them due to the wind. The balloons were being held by a few persons standing behind the Seer. The burst of the balloons caused a commotion at the venue and injured a few. The people in the arena ran helter-skelter out of fear.

Over 15 persons have sustained minor injuries and seven of them have been admitted at JSS Super-speciality Hospital. People who sustained minor injuries were treated at Primary Healthcare Centre in Suttur. The admitted persons are Kalegowda of Hampanahalli in Hassan, Ravikumar, P. Venkataswamy, Chokkamurthy, Kalmalli Shivakumar of Mysuru, Praveen Kumar of Nanjangud and Shivu of Hosahalli in Srirangapatna.

They were mostly mild burn injuries on the cheek and face, according to sources in the Mutt. The Seer, who was wearing a scarf around his neck and head, was immediately rushed to the guest house. He later issued a statement clarifying that there is no need for anxiety over his condition. It was not a major incident, he clarified.

The Seer said, “I am fine and there is no need for the devotees to get anxious. It is a minor incident. As the balloons were yellow in colour, it looked like it was a big explosion. The other programmes related to the Jathra are being held without hindrance.”

Several people, including Chief Minister H.D. Kumaraswamy, Deputy Chief Minster Dr. G. Parameshwara and Siddaganga Mutt Seer Sri Siddalinga Swamiji inquired about the Seer’s well-being over phone. The Seer told them that it was a minor incident and he was fine.

Experts said that nitrogen is not inflammable as 70 percent of the air contains nitrogen. Later, the Mutt authorities issued a press release that stated that it was helium that was used to fill the balloon.

S. Shivakumar, Secretary of Suttur Shivarathreeshwara Jathra Mahotsava, clarified that it was a minor incident and people sustained injuries due to the sudden burst of heat.

He said that the Seer was fine and was giving Darshan to devotees. All the injured are being treated at the JSS Super-speciality Hospital and there was no need to panic as they are all out of danger, he added.