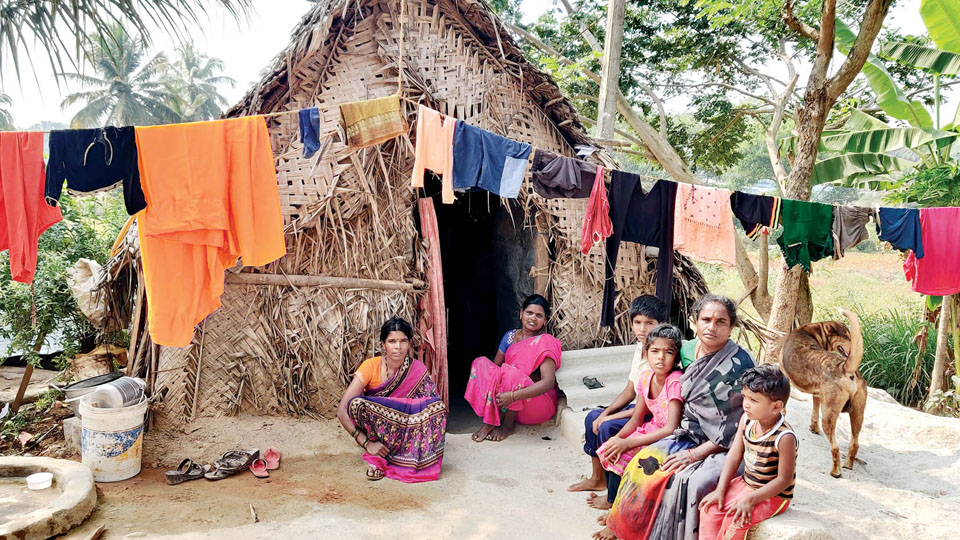 Srirangapatna: Even as the Government is harping on its host of housing schemes, shelterless hut dwellers in Kadatanalu village coming under Darasaguppe Gram Panchayat (GP) in Srirangapatna taluk are in a sorry state, fighting for a shelter of their own.

A total of 37 shelterless families of Darasaguppe were selected as beneficiaries of Indira Awaas Yojana (IAY) years ago. But these families are yet to get sites due to the apathy of thick skinned officials. The authorities have an 8-acre area coming under Survey No. 91 of the village in their command for allotment of sites.

The Government in 2017-18, taking note of these poor families, sanctioned 20’x30’ sites to them in this 8-acre land subject to certain conditions and subsequently, the title deeds of the sites were prepared in respect of 23 out of the 37 beneficiaries. However, the title deeds have remained unissued among the beneficiaries even after a couple of years and are gathering dust at Srirangapatna Tahsildar office. The non issuance of title deeds  has forced the beneficiaries to stay put in their thatched slum dwellings.

These poor families have been living in thatched houses for years and are deprived of basic civic amenities such as drinking water, toilets and sanitation. Apart from this, these families are living under the constant risk of health hazard. The negligent and apathetic attitude of officials has come under severe criticism from members of the public who are sympathetic to the plight of these poor families.

Srirangapatna Taluk Panchayat Executive Officer Bhyrappa said that confusions persist in the list of shelterless people of Kadatanalu village coming under Darasaguppe  GP. Admitting that there has been a delay in the allotment of sites to beneficiaries, he said that a new list of beneficiaries will be prepared once the GP polls get over and sites allotted to them.

Once the  beneficiaries construct houses at the allotted site and move into them, the Government will take measures for allotment of sites or construction of houses for more shelterless people, she said.

MLA Ravindra Srikantaiah said that he visited Kadatanalu village and heard the plight of shelterless people. Alleging that the Tahsildar and the EO were issuing irresponsible statements on the issue, he urged the officials to distribute title deeds to the beneficiaries soon after the GP polls get over.

Some beneficiaries said that they were willing to vacate their huts if the Government issues title deeds for sites and gives time for construction of houses at allotted sites.