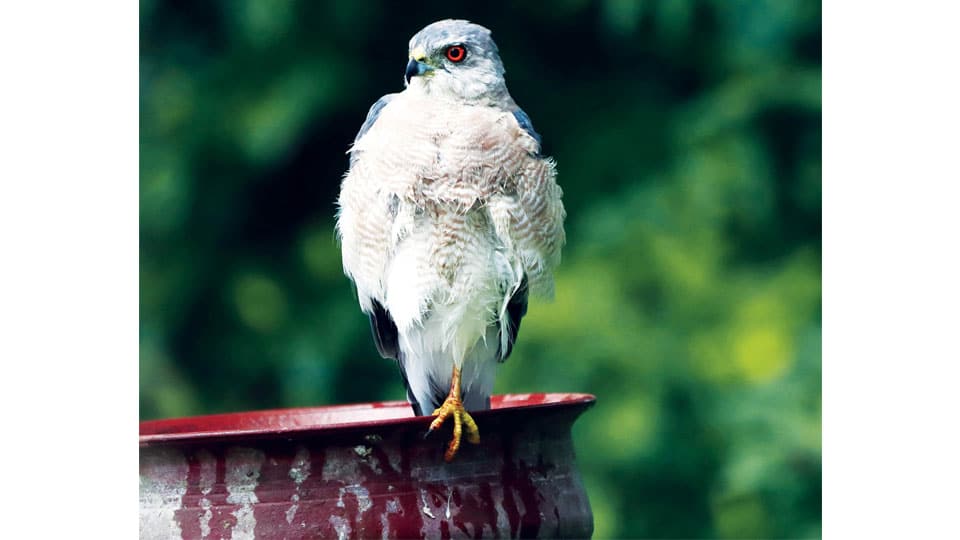 Shikra, the leopard of avian kingdom

The Shikra has long been known for its great courage, coupled with intellect as a hunter. It is the most common bird used in the art of falconry across the country in pre-independence times. Falconry is the keeping and training of birds of prey, especially the falcon, and hunting with them, a practice still prevalent in Pakistan and a few Gulf countries.

Shikra’s name has been derived from Urdu, and the Hindi word, ‘shikari’, meaning hunter. It justifies its name with majesty. Watching the Shikra hunt makes a lasting impression. Shikra is known as Accipiter badius, in Taxonomy, meaning Accipere in Latin to grasp and badius is Latin, a reddish-brown-grey colour, meaning a grasping or seizing bird with reddish-brown-grey coloured body.

A slightly larger than a pigeon, the Shikra is fierce. Males are greyish above and light coloured in the body with red eyes, while females are brownish grey with yellow-coloured eyes.

Built with long feathered legs to swoop noiselessly on its prey, the Shikra has strong talons to grip the prey and kill them instantly with their vice-like grip. Though there are other raptors in the urban locales, these are not as fierce as the Shikra.

The Shikras are more heard about than sighted in large gardens and also in parks. The early morning calls of the Shikra are familiar to most people. The continuous shrill “Tikkkeeee…Tikkkee..Tikkkee” call is heard but the bird is not sighted so easily. The Shikra is most often sighted when it swoops and seizes a prey and flies back.

Shikras are comfortable in urban as well as well-wooded areas. Born hunters they are, they adopt a strategy for a hunt. They plan a hunt, sometimes, rather quite often, Shikras hunt in pairs. The male and female bird in a bonded pair or the fledglings from a clutch, form alliances and hunt.

To hunt, it either takes a low, stealthy flight along the treeline, pouncing on an unwary bird or animal. Sometimes, it soars high in circles and dives down at the sight of prey.

While one of the birds perches deliberately in the open, to be noticed, with the squirrels of the area going into frenzied alarm calls, the other smaller birds of the area also giving out their chattering alarm calls, the other bird waiting for the right moment from a hidden leafy canopied treetop, swoops down with great speed and seizes the prey with its mighty talons and flies off to a perch, to be joined by its partner and share the kill.

Shikras are so intelligent that they seem to understand the habits of other prey animals. One such example is, on cold and cloudy mornings, the garden lizards (othiketha, hentegodda in Kannada) and skinks (haavurani in Kannada) being cold-blooded (ectothermic) need to bask in the Sun to warm their bodies to be able to move around with ease. This Sun-basking they do, perching on fence posts, termite mounds or compound walls exposing their body to get the warmth.

The smart Shikra knows this and they hunt so fast and fiercely even before the lizard or snake realises what happened, the Shikra is already dining on them on a tree top. Shikras are opportunistic hunters. Any smaller animals are quite fine to their palates. But it has been observed that some individuals develop a taste for a particular kind of prey. Some love to have garden lizards while some regularly go for only birds. Some specialise in hunting bats.

Small bats about the size of a mouse, that roost in garage rafters or inside storm drain pipes in human dwellings are preferred by some Shikras. To hunt these bats, the Shikra develops a skill to hunt the bats in flight at dusk in very low-light conditions. They even discover the bats day roost and attack and pull them out of the niche in the wall or a rafter.

Shikras bond a pair for life. They build a nest in leafy trees like the mango, mahogany and neem trees. The breeding pair regularly breeds every two years in the same nest, by repairing and refurbishing the old nest with new twigs and sticks.

Their nesting season lasts from April to June, which is quite an interesting time to observe their behaviour from a distance. Their nest looks like a loosely built cup of twigs and sticks, untidy, much like that of crows.

They aren’t exactly homely birds. However, they do take precautions by building their nests usually in trees, well screened by leaves in order to reduce any kind of outside disturbance. Both males and females incubate the eggs (they believe in equality) but males are the primary food-bearers.

Shikra, the urban hunter, the fearless raptor is also called the leopards of the bird kingdom, owing to their similarity of preying and devouring their prey, on a tree top and stashing away a little on the tree top for the next meal. Exactly like a leopard. Though these birds are not listed in the endangered list of the IUCN, certain local populations are dwindling, owing to habitat degradation.