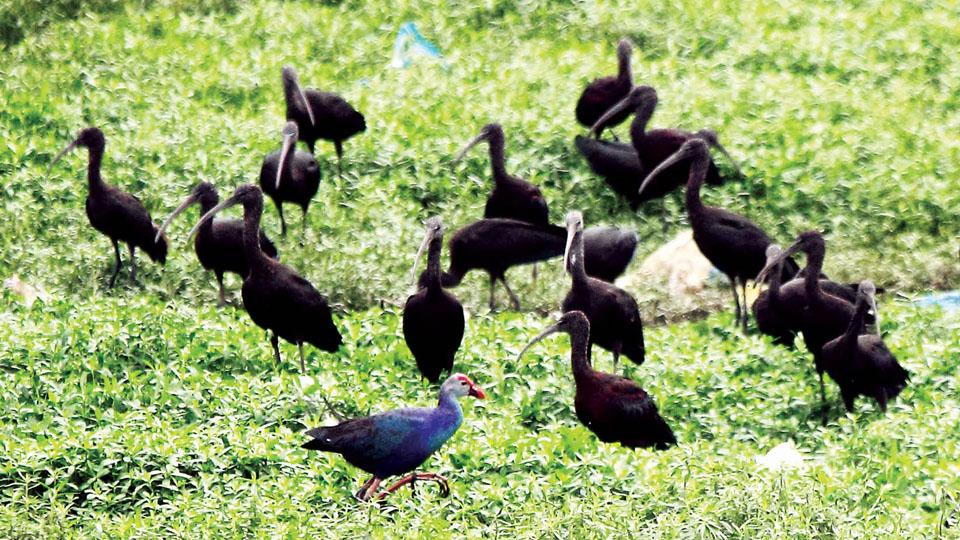 The lake was home to more than 165 species of birds (Observed and recorded over a ten-year period), having many migratory birds visiting this place to spend the winter months from as far away as Northern Europe and Africa.

This lovely and lively lake had started degenerating and decaying, with the industrial and construction activities surrounding the lake area increasing.

Demolished building debris, garbage, slaughter house waste and all sorts of garbage was dumped into the grasslands beside the lake. The inflow storm drains, which were until now filling up the lake with rain water, started bringing in the sewage discharges from the surrounding localities. Gradually, the lake, which once throbbed with life, was getting suffocated and death was imminent. Hebbal Lake was dying.

Fortunately, good sense prevailed on the administration and the lake was offered to private corporates for restoration and development. More fortunate was the willingness and interest, shown by the country’s leading Information Technology giant (Infosys), under their Corporate Responsibility Programme (Infosys Foundation), to take over the responsibility of reviving the lake.

What happens when responsible, professional, committed, sensible and people with concept, people with team work spirit, put their minds and effort, to develop something, is to be seen than heard. Hebbal Lake, now, is back to its glory and throbbing with life once again.

Right from the approaching roads, the entrance, the lake bunds, the water spread area, the surrounding area, everything has been made like the way they should be made. Not what can be made, but what should be made, seems to be the mantra here.

Several island have been created with suitable and appropriate afforestation, the native reeds and aquatic plant life have been restored and retained, the embankment has been planted with several suitable plants and trees to host the bird life.

Prominence given to native shrubs and plants and not to mere ornamental looks, is highly appreciable here. It does not mean that good looks and aesthetics have been ignored, everything has been handled creating a balance between aesthetics and nativity restoration.

With this kind of a fertile and congenial lake restoration, the final appreciation and certification for the right kind of development has been awarded by nature, yes, nature has endorsed and appreciated the development.

The resident and migratory birds, which once thronged Hebbal Lake, before vandalism of the lake began, had started drifting away from the lake to better locations, during the unholy and uncared for period.

Now, from last year, with the lake holding a good spread of water, good supporting trees and aquatic vegetation, strategically created islands and mud banks, no vandalism, the birds decided to come back.

Come back they have but better than the earlier periods. They have started arriving in hundreds and thousands, like never before, even to the original unspoilt lake. This is the final approval by nature, that, the lake is like what it should be.

To quote a few examples of acceptance by the migratory and resident birds:

Glossy ibis – Plegadis falcinellus, a black shiny bird, with iridescent colours on the body, which were formerly wintering here, were sighted either single or in a few pairs, the final count not being more than dozen birds. This year, these birds came in huge flocks, so huge were the flocks, the birders and migrant watchers were baffled. Never had this huge flocks of this species were sighted earlier; the flocks were having more than a few hundred birds and they kept coming in.

Northern Pintail – Anas acuta, a duck species, which comes down from the European countries in winter to spend their winter, migrated down to Hebbal Lake for the first time. These species do come to Karnataka, but they are sighted in our KRS backwaters and not in Hebbal Lake. This is the first time sighted in this lake. Huge flocks were sighted, staying comfortably until the first few summer showers and the they left.

Northern Shovelers – Anas clypeata, a regular visitor and one of the earliest arrivals from the Northern Hemisphere, to this lake were sighted in less than a hundred birds until now. This year, they arrived in huge flocks of several hundreds and stayed for the full winter, until the first summer rains, urged them to fly back.

River Tern – Sterna aurantia, as the name itself suggests, is a bird of the rivers. A fish-hunting bird as big as a pigeon, white in colour with yellow beak and red legs with a two tails feathers streaming like ribbons, visited this lake. This is the only and first record of sighting these species in a Hebbal Lake. These birds do not inhabit any lake. They are riverine birds, but they landed here and has been documented.

Crested Serpent Eagle – Spilornis cheela, a predatory bird, a predatory raptor of the riverine forests, regularly sighted in the Cauvry riverside hunting rodents and snakes, visited this lake for the first time ever. This has been documented.

Baillon’s Crake – Porzana pusilla, a shy and evasive bird, which leads a secretive life, coming out at dusk to forage, a bird that breeds in the Himalayas, comes down South to winter. This species was sighted for the first time in this lake which has been documented.

The lake is once again hosting many wintering species of Wagtails, Sandpipers, Snipes and Stints, which have all increased in their numbers many times.

The resident birds like the Larks, Doves, Pigeons, Herons, Storks, Cormorants and Darters are all settled well here without fear of molestation. Thanks to the security measures and controlled visitor timings.

Little Grebes – Tachybaptus ruficollis and Eurasian Coots – Fulica atra, Grey-headed Swamphen – Porphyrio poliocephalus and Bronze-winged Jacana – Metopidius indicus, though resident birds of the lake, which had started drifting away from here for nesting and breeding, have now started nesting and breeding here, as the conditions are very favourable to them. Right now there are plenty of Grebes and Coots nests, some with eggs some with chicks.

Hebbal Lake, now with a full spread of water, wonderfully well-forested islands, the rich aquatic vegetation, a well-managed Water Purification Plant, to purify any toxic water that might creep into the lake, let out by irresponsible processing units in the area, is a show-piece, an example in restoration, an example in showing how things can be managed professionally with commitment.

In all, this development planning and execution, visitor-friendliness is not sacrificed. In fact, Hebbal Lake is an ideal place for the joggers and evening walkers. With fresh air and unpolluted and pleasant surroundings, even a visit to this place brings a smile on anybody’s face.

Hebbal Lake is now a Birds Sanctuary, a birding hotspot of Mysuru, a must visit place for birders and bird photographers, a place of Migrant Watch Study and a place to cherish and keep it that way, without littering and spoiling the serenity of the lake.

Hebbal Lake ecosystem is back and flourishing. Let’s keep it that way.