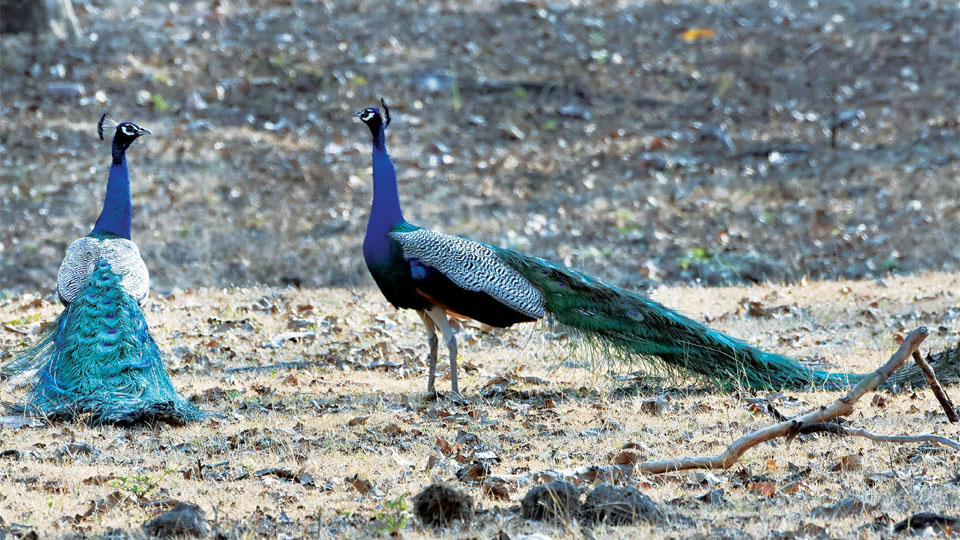 Proud… as a Peacock

Peacock — Pavo cristatus, being its zoological name — the flamboyant, beautiful, colourful, arrogant bird, the bird with an attitude, is naturally selected as a National Bird of India.

Peacocks have a built-in Pride in them and they cannot be blamed for that, nature has created them; Only the males, with such lovely iridescent colours and a unique long tail, with ‘Ocellated’ patterns (eye-like markings in multicolour), sometimes opened up fan-like to display, impress his Ladies — the Peahens. This is a sight to watch.  When a Peacock spreads his long tail feathers (referred to a Train in birding jargon), it is not just the Peahens that get impressed but any viewer too. Such is the magic of a Dancing Peacock sight.

Peacocks are birds that are long associated with Indian Culture and Mythology. Peacocks (Peafowl used as a common name applied to both sexes) are the Vahana of Kartikeya and Subramanya, the son of Lord Shiva and revered very much by Hindus. Peacocks are also revered as the Slayer of Serpents. This worship and reverence for the birds have been the cause for Peacocks thriving in our country. The presence of Peacocks in our farming lands is being considered as Good Fortune and a Harbinger of a Good Rainfall season.

Mythology and Beauty have given the Peacocks an advantage over other birds for survival and being protected. Peacocks shed their long tail feathers once in a year and grow fresh ones regularly. It is these shed feathers that are collected by the tribals and sold as novelties like fans and vase bouquets.

Love the Peacock… Respect the Peacock… Let the next generation have the Good Fortune of watching these Great Birds.