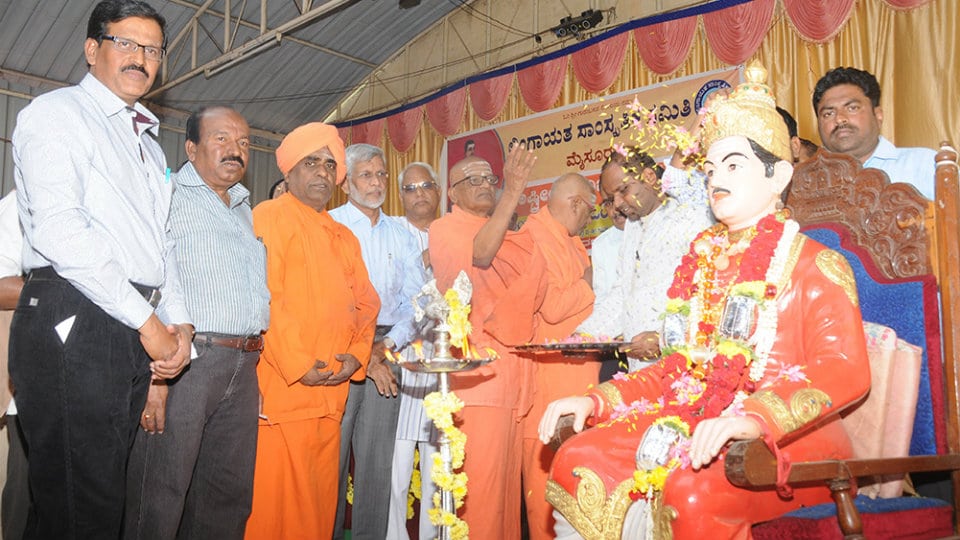 Mysuru: Urging Siddaganga Mutt Seer Dr. Sri Shivakumara Swamiji and Suttur Mutt Seer Sri Shivarathri Deshikendra Swamiji to break their silence and make their stand clear on the demand for separate community status to Lingayats, writer Prof. Chandrashekar Patil, popularly known as Champa, has said it was not right on the part of the Seers to keep mum.

He was addressing the gathering during a talk on ‘Lingayat — An independent religion’ organised by Lingayat Cultural Committee at Nataraja Women’s College in  city on Sunday.

Observing that the Seers should break their silence and extend support to the ongoing struggle conforming with the principles of the 12th century social reformer Basavanna, Champa asked the Seers of Panchapeetha to take part in the movement instead of distancing themselves from the same. All Mutts, irrespective of Virakta and others, should come together for the cause, he added.

Tracing the genesis of Lingayats, Prof. Champa said that  it was due to the conspiracy hatched by conservative forces that ‘Lingayat’ is camouflaged by ‘Veerashaiva.’

Noting that Lingayat is not a part of Hindu religion as it was founded as a separate religion that later grew into a bigger community, he said that, however, attempts are being made in the 21st century to trace the roots of the religion that originated in the 12th century.

Former bureaucrat Shivanand M. Jamdar, also the Convenor of Lingayat Swatantra Dharma Vedike, said that some Mutts in Mysuru region still use the word ‘Veerashaiva’ in their parlance.

Quoting a population census report of the erstwhile princely Mysore State where Lingayats were listed as ‘Shudras,’ Jamdar said prior to that Lingayat was a separate religion till 1881.

No sooner the census report was out, many books and journals were published only to create a negative campaign against Lingayats, he said and added that the life and times of revolutionary Saint Basavanna were also portrayed in bad light.