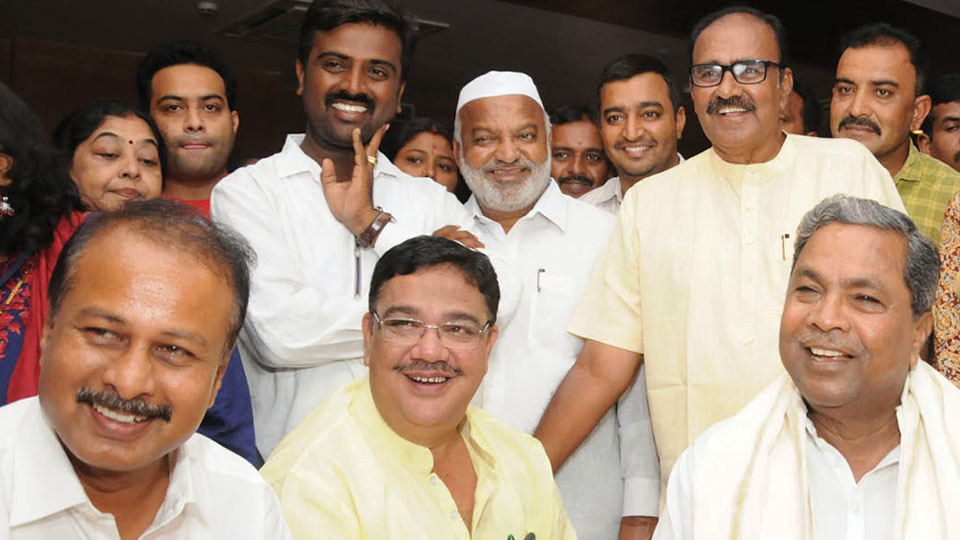 Mysuru: Former Chief Minister Siddharamaiah crediting the Congress for the victory in the Jayanagar Assembly Constituency in Bengaluru, this  morning, said that it was not because of coalition government in the State that Congress party emerged victorious but it was because of the good work done by his party and also because the winning candidate Sowmya Reddy was actively involved in the Constituency.

In an informal chat with media persons at a private hotel in city this morning for about half-an-hour, Siddharamaiah who was in a nostalgic mood before attending an introspection meeting with the winners and losers of the party, said that the main purpose of the meeting was to discuss for the preparation of the forthcoming Lok Sabha elections and the strategy that needs to be adopted, as also why Congress fared badly in the District.

Then, going back in time he said, he would have been very happy if he had continued as a lecturer as he was a very popular teacher.

“Once upon a time, I was a very popular teacher. I taught for three years and the students used to enjoy my classes. When I look back, I think I was more suited for teaching than politics. Even now I would love to go back to teaching. But as I am old, as I will be turning 71 in August, it is not possible for me to teach,” said Siddharamaiah.

He said that the introspection meeting was a closed door meeting and neither the media nor the leaders and party workers were allowed to participate.

Revealing an interesting tit bit, while he was in Badami attending a thanksgiving function, from where he managed to win, he said that former Minister Chimmanna Katti who had vacated his seat for him (Siddharamaiah) to contest told him that he does not look 71 but 21 and he could marry a second time.

“I was quite embarrassed when he told me this and I told him if the young girls hear this, what they will think of me,” he said with a mischievous smile.

Asked about the farmers’ loan waiver, he said that since H.D. Kumaraswamy was both the Chief Minister and Finance Minister now, he has to take the decision. “However, one cannot compare the present situation to the previous government as they are not related. But all the programmes of our government will be carried forward,” he said.

To a question on what would be discussed at the Atmavalokana (introspection) meeting, Siddharamaiah quipped, “When there is no Atma where is Avalokana?’ Former MLA Vasu recalled that the hotel where they were sitting was the place where Aziz Sait, father of Tanveer Sait was born. Siddharamaiah immediately reminisced about how the late Sait had asked him for a walking stick.