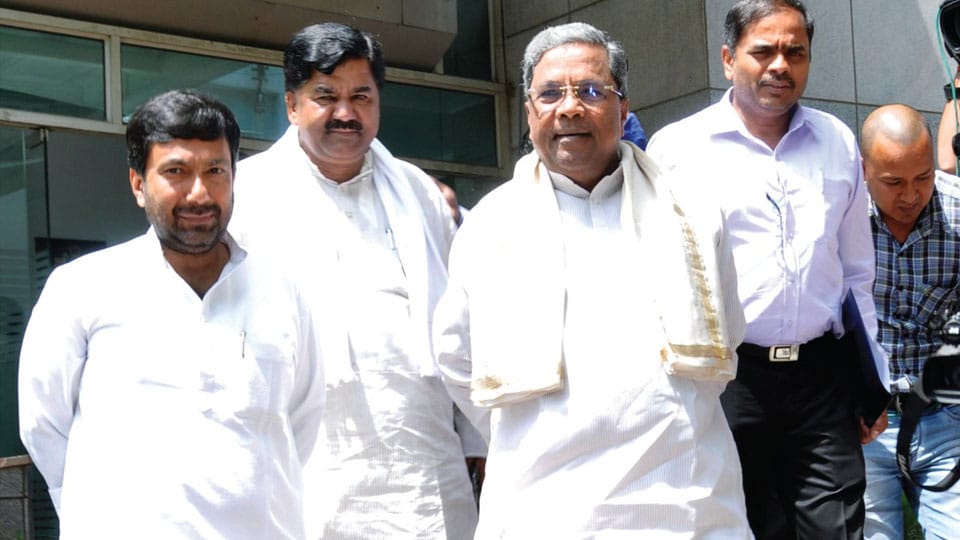 New Delhi – After steering Congress party to victory in the recently held Nanjangud and Gundlupet by-elections, Chief Minister Siddharamaiah met party Vice-President Rahul Gandhi in New Delhi this morning and sought permission to fill up two vacancies in his Council of  Ministers and three vacancies in the Legislative Council.

CM Siddharamaiah, who arrived in New Delhi yesterday, met Rahul Gandhi at his Thuglak Lane residence. He was welcomed by the party Vice-President who congratulated the  CM for the by-election victory. The meeting lasted for more than one hour.

According to party sources, Rahul asked Siddharamaiah about the election strategy and the measures taken to counter the BJP threat. Rahul is particularly said to have been impressed by the performance of Nanjangud candidate Kalale Keshavamurthy (now an MLA) who defeated a heavyweight like former Minister V. Sreenivasa Prasad of BJP by a margin of more than 20,000 votes. Both Rahul and Siddharamaiah discussed the party’s strategy for the 2018 Assembly elections, vacancies in the State Cabinet and in the Upper House. Though some of the names of probable candidates have been mentioned by Siddharamaiah for the Ministry and the Upper House, sources said that the names will finally be cleared by Congress President Sonia Gandhi who is expected to meet the CM in the evening.

Sources said that the CM will also push for a change of guard in the Karnataka Pradesh Congress Committee (KPCC) while KPCC President Dr. G. Parameshwara, who is also the Home Minister, is expected to lobby for his continuation. Interestingly, the name of Energy Minister D.K. Shivakumar, a Vokkaliga strongman, is doing the rounds for KPCC President. The name of former Minister and Kolar MP K.H. Muniyappa is also doing the rounds.

Sources said that Siddharamaiah is under severe pressure from eight candidates who are lobbying for three Legislative Council seats. The Cabinet vacancies arose following the resignation of H.Y. Meti over a sex scandal and the passing away of Co-operation and Sugar Minister H.S. Mahadevaprasad, whose wife Dr. Geetha Mahadevaprasad won the Gundlupet by-election.

In the Legislative Council, three seats have been vacant for the past one year following the completion of the term of Kannada actor Jaggesh, educationalist and social worker P.V. Krishna Bhat and BJP leader Lehar Singh, all nominated during the previous BJP regime. However, Lehar Singh was elected to the Council from the Legislative Assembly constituency.

Party sources said the CM is keen on inducting a Kuruba in place of Meti as he belonged to the same community. He is expected to choose between Kundagol MLA C.S. Shivalli, Badami MLA B.B. Chimmanakatti and MLC H.M. Revanna. He is also reportedly keen on inducting Geetha Mahadevaprasad, a Lingayat. The other contender is Tiptur MLA K. Shadakshari. State Congress Leaders including KPCC President Dr. G. Parameshwara, Bengaluru Development Minister K.J. George, KPCC Working President Dinesh Gundu Rao, political advisor to Chief Minister Govindaraju are in New Delhi for a meeting with party bosses. They are expected to return to Bengaluru on Monday.