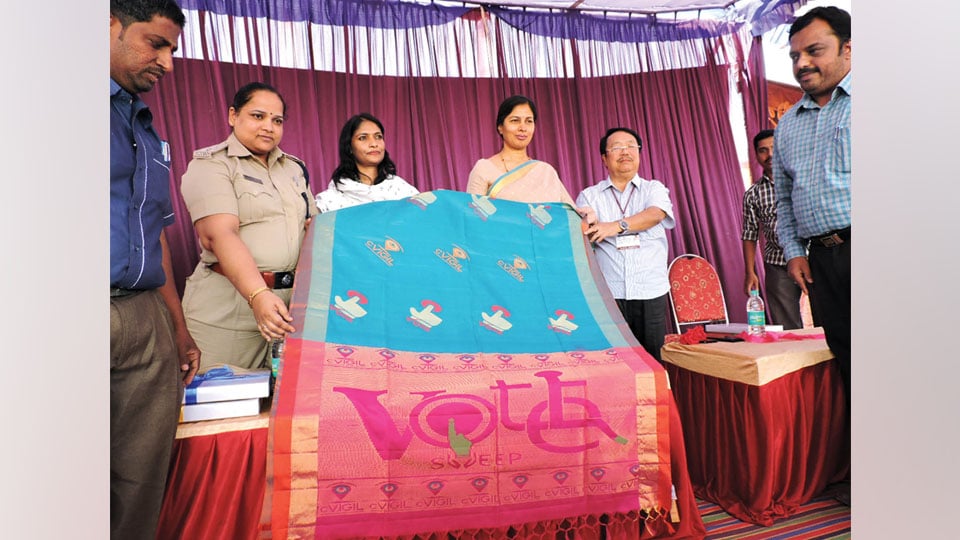 Chamarajanagar:  The definition of democracy means of the people, by the people and for the people that was uttered by the 16th President of United States Abraham Lincoln and hence in the context of the Indian elections where the voter is supreme it becomes the responsibility of every voter to cast his/her vote. In this background, the Chamarajanagar SVEEP (Systematic Voters Education and Electoral Participation) committee has been formed and through this voter awareness is being created.

In order to increase voter turn out the Election Commission has appointed celebrities as brand ambassadors in different constituencies and creating voter awareness. The District SVEEP Committee has decided to print four logos of the Election Commission on the silk sarees which is being done through Handloom and Textile Department.

The handloom weavers of Kollegal have weaved a logo each on four different sarees. The Election Commission of India launched a new vigilant citizen app also known as cVigil in the country and the voters can call helpline 1950 to report any violation of model code of conduct during polling including irregularities like distribution of money, sarees, cooker and other materials to entice the voters. The logos have been artistically designed on these sarees depicting these                                           messages.

The people recognising the efforts of the weavers in creating awareness regarding the importance of voting must turn out in large numbers to vote, said Chamarajanagar Deputy Commissioner, Chief Executive Officer and  Election Observer.