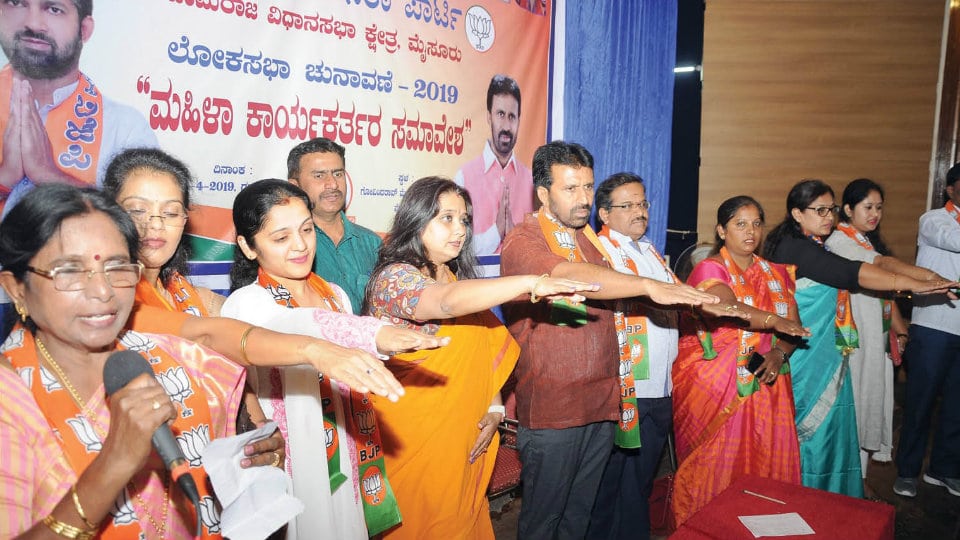 Mysuru: Prime Minister Narendra Modi Government has run a corruption-free administration in the last five years without a single black mark, unlike the previous UPA Government which was embroiled in various scams like the Coalgate and Helicopter scams turning the country into a den of corruption, said BJP leader and actor Malavika Avinash.

She was speaking after inaugurating ‘BJP Women Workers’ convention at Govinda Rao Memorial Hall at JLB Road Cross held under the leadership of BJP MLA L. Nagendra here yesterday and said due to the corruption-free Government the GDP rate has risen to 7.02 per cent. As a result ours is the fastest growing country in the world, she added.

Soon after the Pulwama attack where 44 CRPF jawans were martyred, the Modi Government swiftly acted and within 11 days sent the Air Force and attacked the terrorist camps in Pakistan and showed the strength of Indian Army, she said.

In the 2008 Nov. 26 terrorist attack in Mumbai nearly 200 people lost their lives but the UPA Government did not take any action and as a result the Pakistan-sponsored terrorist attacks increased. But by Modi giving importance to the nation’s security, the country is safe and secure, she said.

The Prime Minister has taken special interest for women’s security and with the Swachh Bharat campaign every house and school in the country is provided with toilets. Through Ujwala scheme free gas has been distributed to every household, thus alleviating the problems of rural women, she said.

Siddharamaiah keeps questioning frequently about what Narendra Modi has done to the country in the last five years. Hence, I have brought a report card. Mr. Siddharamaiah tell me your address. It is said that you are not found in Chamundeshwari. If we go to Badami you do not have a house there. If we come to Bengaluru then Siddharamaiah is no more the Chief Minister. Then how can we reach you the report card? — Malavika Avinash