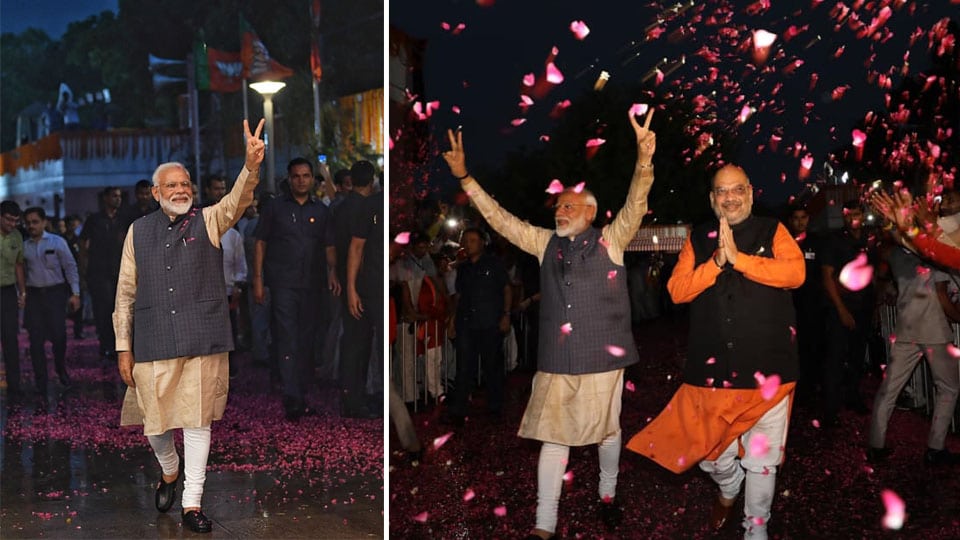 Galaxy of leaders including US President Donald Trump, Russian President Vladimir Putin, Chinese President Xi Jinping likely to be invited for the gala ceremony to be held on May 28, 29 or 30

New Delhi:  A galaxy of top world leaders could be invited to attend Prime Minister Narendra Modi’s swearing-in ceremony for his second tenure in power including leaders of the P-5 countries (US, Russia, UK, France and China), Japan, Germany, Israel, prominent Organisation of Islamic Cooperation (OIC) countries like Saudi Arabia and UAE as well as several SAARC countries in India’s neighbourhood.

While speculation is rife in this regard, Government sources however said any invites would only be issued after the Prime Minister’s Office (PMO) takes a decision in this regard. It also remains to be seen whether Pakistan PM Imran Khan is invited.

Government sources said it was still too “premature” to talk about any invitations to foreign leaders to attend the swearing-in ceremony. Prime Minister Narendra Modi is expected to take oath as the Premier of the world’s largest democracy at a grand event in the next few days. The BJP has not officially confirmed the date of the swearing-in ceremony. However, some reports suggest that the event may take place on May 28, 29 or May 30.

Speculation is rife that US President Donald Trump, Russian President Vladimir Putin, Chinese President Xi Jinping could be among the leaders invited. Attendance of some of the world’s top leaders is bound to further boost PM Modi’s image as a strong leader under whose leadership India is realising its potential in the world. This will also come at a time when India is pushing for permanent membership of the  UN Security Council.

In May 2014, calls to invite leaders of all SAARC nations went out even as the results came in, and the message of “Neighbourhood First” was sent out when leaders of all neighbouring countries (with the exception of Bangladesh PM Sheikh Hasina).

This time around, Modi is understood to have had held a senior level meeting in early May to discuss who would be in invited, and asked for “creative suggestions” on whom to invite. Will the neighbours be called back for swearing in ceremony 2.0, or will there be others? Will any foreign leader even be included this time around? Party insiders say something out-of-the-box will definitely be thought of.