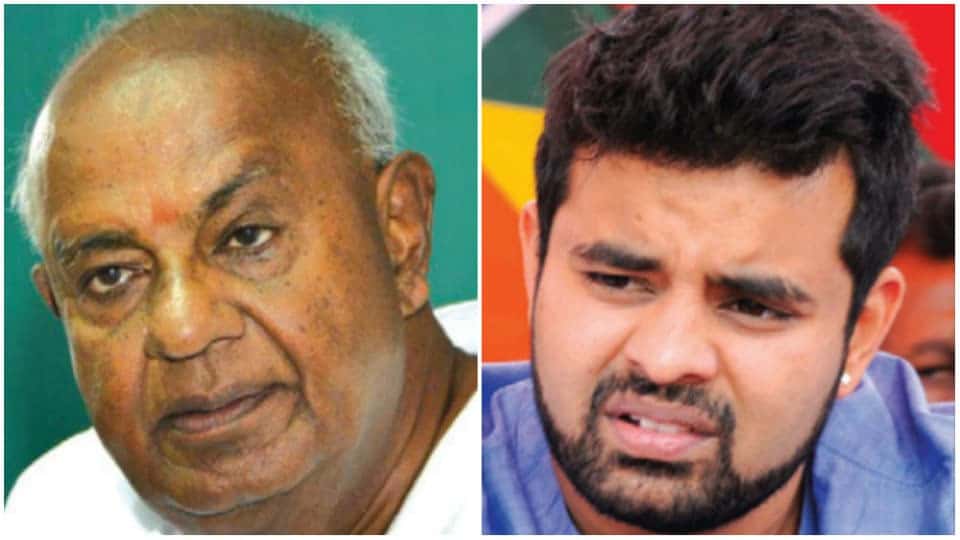 Hassan: Hassan is the only constituency that the JD(S) has won in Karnataka. However the candidate who won — H.D. Deve Gowda’s grandson Prajwal Revanna — has now claimed he wants to step down from his Parliamentarian post despite his massive victory, saying he had no reason to rejoice as the election brought a crushing defeat for 87-year-old Deve Gowda.

Deve Gowda suffered a massive defeat against BJP’s G.S. Basavaraj in Tumakuru. Prajwal Revanna said this morning that he has decided to step down from his Parliamentarian post and vacate the seat for his grandfather.

“My grandfather made so many sacrifices for the people of Karnataka. The party workers and I, we cannot bear the loss. He is the backbone of our  party. I have decided to vacate the seat for him and resign. We will celebrate after he wins,” Prajwal Revanna told reporters.

Prajwal said that he has no reason to rejoice until he sees his grandfather back in power. He also held talks with JD(S) party workers in Hassan and pleaded with the defeated cadre to work once more for Deve Gowda.

“I have only one request for the party workers. Deve Gowda has to come back to power.  He was meant to serve the people. In order to reinstate the gap left by his defeat and in order to build confidence in our party workers, I have made this decision. We will have reason to celebrate once he wins, until then I request them to support my decision,” he added.

However, no official call has been taken by the party in this regard, so far. Prajwal Revanna said he will go to Bengaluru and hold talks with his grandfather and his CM uncle H.D. Kumaraswamy regarding his decision to resign.

“I am leaving for Bengaluru. I will try to convince my grandfather that it’s the people’s choice that he contest from Hassan. I want him to win,” he added. It is entirely likely that this is just emotional talk and Prajwal will continue to represent Hassan, political observers said.