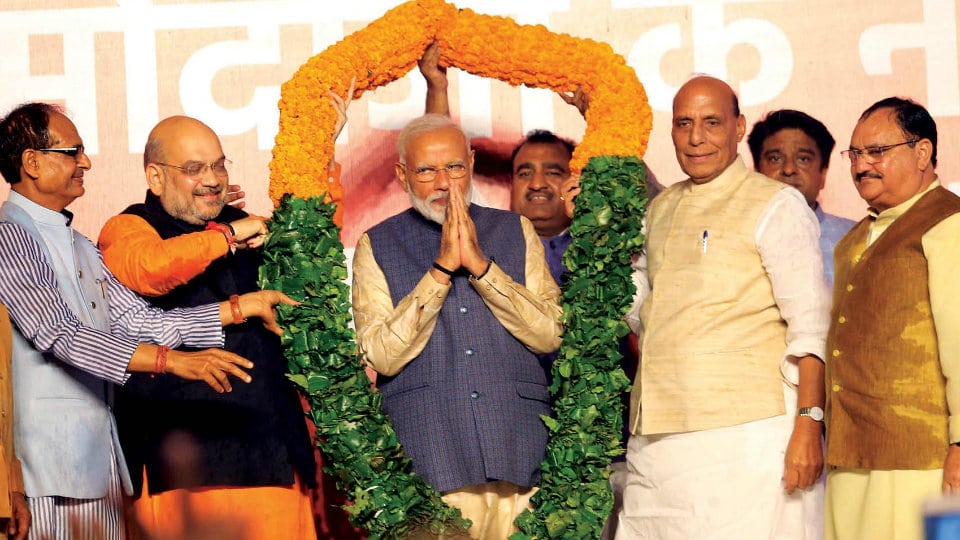 “In the last five years, people have realised that the taxes they are paying has been put to nation-building”

New Delhi: Registering a mandate bigger than the 2014 polls, Prime Minister Narendra Modi-led NDA returned to power for a second straight term. The BJP maintained its hold over its core vote base — the Hindi heartland, Gujarat and Maharashtra — and made inroads in Bengal and Odisha. With the landslide victory, Modi is the first non-Congress full majority Prime Minister to get re-elected with a stronger majority.

After the victory, PM Modi and BJP National President Amit Shah reached Party Headquarters in New Delhi to a rapturous welcome. In his speech, Modi promised “I will devote every moment of my life and every fibre of my body” to the welfare of the nation. He also promised the bitterness exhibited during the campaign would be pushed behind.

On the contrary, the Congress’ strategy to pose a formidable challenge to BJP has come as a cropper. It failed to carry forward the momentum gained during its recent victories in Madhya Pradesh, Rajasthan and Chhattisgarh Assembly polls. The only silver lining in the bleak scenario for Congress is that it fared better in Punjab and Kerala. The results have raised questions on Congress’ leadership and the future of the grand old party.

In a rousing speech at the Party Headquarters here to celebrate the BJP’s spectacular victory, Modi told cheering supporters that the election has thrown up a mandate to build a new India.

“People are chanting Modi, Modi. But this is not a victory of Modi, it is the victory of people who are desperate for honesty in the system. It is not Modi’s victory, but a win of people’s hopes and aspirations,” Modi said.

Striking a conciliatory political tone, he also reached out to his rivals, urging everyone to put the rancour of bitter and often nasty campaign behind them. What’s past is past, he said. “We have to move ahead. We have to take everyone with us, even our opponents. We have to work for the benefit of the country,” he said.

In the last five years, people have realised that the money they are contributing in taxes has been put to nation-building, he said. Addressing the countrymen directly, Modi said he will not do anything with bad intention, even though, he added, he may at times commit a mistake on job. “I will not do anything for myself,” he said, signalling the noisy crowd to keep quiet and then added, “I will devote every moment of my time and every fibre of my being for my countrymen.”

“Whenever you judge me, judge me on these three parameters. If I fall short on these, curse me. But I assure my countrymen that what I have said in public I will do my best to fulfil,” he said. Values and spirit of Democracy and the Constitution enjoin his government to take everyone along as the country is run with consensus, the PM said.

In a jibe at BJP’s rivals, who are seen as the Secular counter to the saffron party’s Hindutva agenda, he said people who used to proudly wear a “fake tag” of Secularism did not talk about it at all.