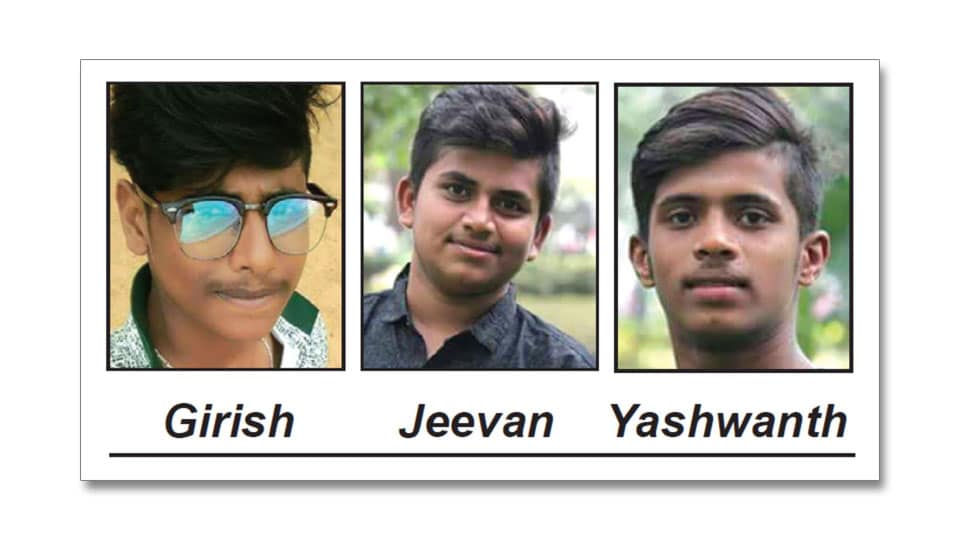 In a ghastly mishap, three teenaged motor cyclists from Mysuru were killed when the two-wheeler they were riding was knocked down by a Bolero near Hosa Anandur gate on Mysuru-KRS Road yesterday.

The deceased have been identified as Girish (19) of Vokkalageri, Jeevan Gowda (18) of Kumbarageri and Yashwanth (18) of Ashoka Road in city.

The three were returning to the city from Balamuri after celebrating a friend’s birthday, when the Apache motorcycle (KA-09 MH-3990) they were riding, was knocked down by Bolero (KA-45 6470) vehicle which was proceeding towards KRS.

While Girish was Killed on-the-sopt, Jeevan and Yashwant died en route to the hospital, it is learnt. The driver of Bolero vehicle fled from the spot soon after the mishap. KRS Police have registered and are investigating.

In another mishap, two persons were killed when the motorcycle they were riding collided -on with a canter vehicle near the Forest Department office at Saragur in H.D. Kote taluk on last evening. The deceased have been identified as Nagashetty (32) and Sannamadashetty (35) of Gontakalahundi in H.D Kote.

The two were travelling on a motorcycle (KA-09 HB-0321) from Saragur to their village, when the speeding canter (KA-35 3903) proceeding towards Mysuru, knocked down the motorcycle near Saragur Range Forest Office. While Nagashetty was killed on-the-spot, Sannamadashetty died while being shifted to a Mysuru hospital, it is learnt. Saragur Police have registered a case.

READ ALSO  Five youths killed in two accidents: All the victims were in their twenties

In another freak mishap, a teenager was killed and his parents sustained serious injuries when they were knocked down by a speeding canter near Induvalu on Mysuru-T. Narasipur Road on Thursday night.

The deceased has been identified as Santosh (19) of S. Kebbehundi in T. Narasipur and injured parents are Shobha and Mallesh, who have been admitted to JSS hospital in Mysuru.

Mallesh and Shobha were returning to their village from Mysuru on a TVS moped (KA-55 S-3071) on Thursday night, when the two-wheeler ran out of fuel.

Mallesh then called his son and asked him to bring petrol, following which Santosh bought petrol in a bottle from T. Narasipur and was filling it to the moped near Induvalu, when a speeding canter proceeding towards Mysuru knocked him and his parents who stood beside the moped.

The canter (KA-26 3210) is said to have first hit a private bus and then moved further knocking down the three.

All the three, who sustained serious injuries, were rushed to JSS hospital, where Santosh breathed his last sometime later, it is learnt. T. Narasipur Police have registered a case.