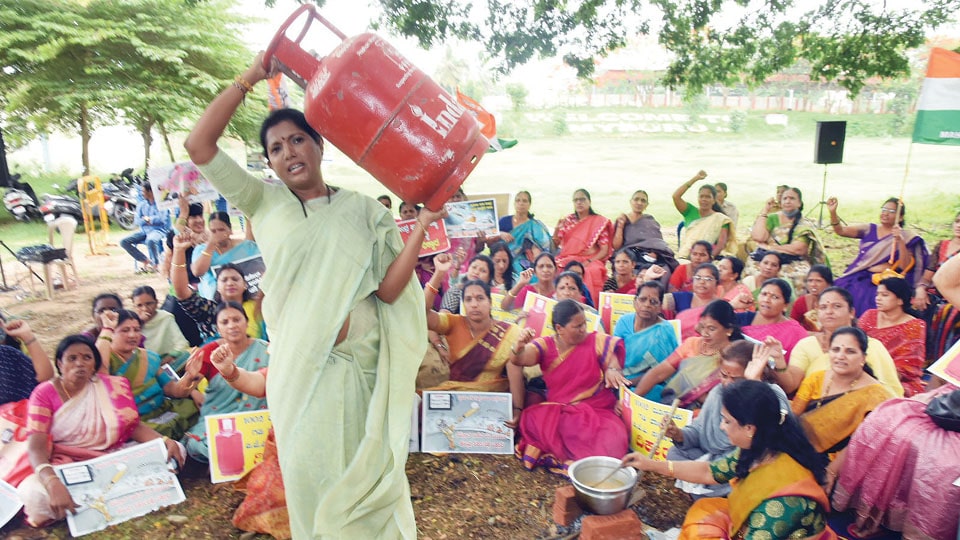 Slew of protests held in city

The members of Mysuru City and District Congress staged a protest at Congress Bhavan near City Railway Station over rising prices of LPG Cylinder and other essential commodities.

Dr. Pushpa Amarnath lifted an empty gas cylinder and displayed the anger of women against the cooking gas price.

Pointing out that during the UPA tenure under Dr. Manmohan Singh, the cooking gas price was Rs. 410, she said, “Now, it has crossed Rs. 1,000. The PM talked about Achhe Din for people before coming to power, but brought difficult days now. With Ujwala scheme they had claimed that kitchens will be smoke free. But frequent increase in LPG cylinder price has forced Ujwala users to use fire wood and more smoke is seen in the kitchens now,” she added.

NSUI protest against series of scandals

In another protest, the City Unit of National Student Union of India (NSUI) staged a protest at Ramaswamy Circle against the series of scandals during the BJP Government in the State.

Alleging rampant corruption in the selection and appointment of various Government jobs including PSI, FDA, PWD Junior Engineers etc., the protestors said that sincere and hardworking students are being victimised because of the prevailing corruption practises and demanded a transparent inquiry into the alleged illegal appointments.

Members of All India Democratic Students Organisation (AIDSO) alleging irregularities in the exam held for the appointment of Assistant Professors, staged a protest near Deputy Commissioner’s Office.

The protestors shouted slogans against the State Government for the lapses in the examinations held recently for the appointment of Assistant Professors and demanded an enquiry into the leakage of question papers.

Condemning the leakage of question paper of competitive exams, they pointed out that the Registrar of Karnatak University has been arrested in this connection and demanded a thorough probe into the scam.