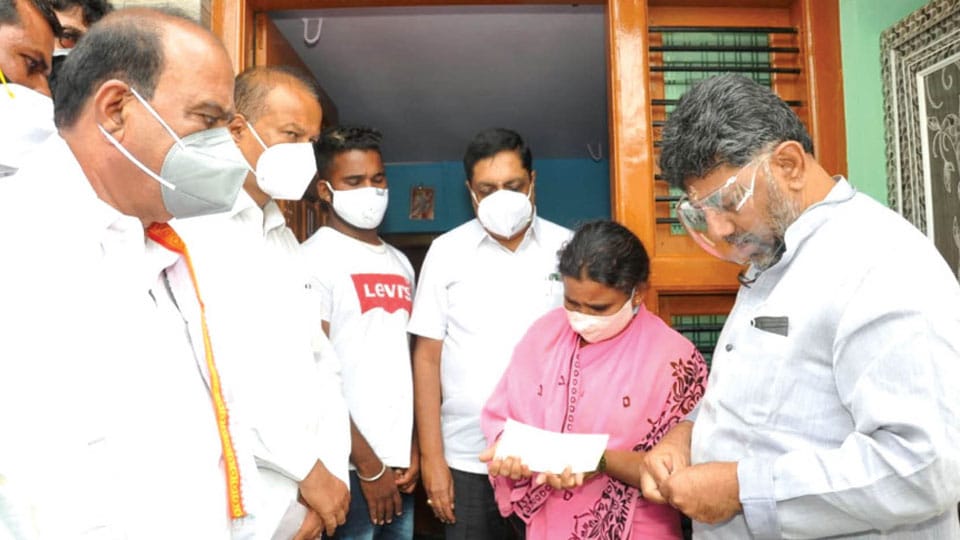 “Murder cases must be booked against officers responsible. While the Government initially said that only three people died, we discovered that 28 had passed away due to oxygen shortage here. Later it came to light that 36 patients died. These are not deaths by accident, but murders committed by the Government. No action has been taken regarding these murders,” he said speaking to reporters yesterday after a day-long visit to the homes of the victims’ families.

Also, the COVID Monitoring Committee of the Karnataka State Legal Services Authority (KSLSA) submitted a report to the High Court stating that the toll in tragedy might have been 36, and not 24, he noted.

Shivakumar said that Congress has distributed Rs. 1 lakh as aid to the families of deceased, who lost their life due to oxygen shortage at the hospital.

READ ALSO  Govt. may allow relatives of COVID-19 patients to meet them in PPE kits

“As the KPCC President, I am meeting the families of all 36 victims today. I looked forward to the Government meeting them, but they did not meet. We were forced to come here seeing their distressing condition, and to provide them relief from the party,” he added.

“Even if the CM could not make it, why didn’t the Ministers come and meet these families? Realising the responsibility of the Opposition, we have done a lot to reassure these people. I have utmost respect for the people of the State and for the Karnataka High Court. The relief of Rs. 2 lakh was only paid by the Government after the High Court forced it to do so,” he claimed.

Yediyurappa may be from Shivamogga, but he should not forget that he is Chief Minister of the entire State. He should feel ashamed of himself for not consoling the families of the 36 victims. He said the BJP Government paid Rs. 2 lakh compensation to the families whereas the neighbouring Andhra Pradesh distributed Rs. 10 lakh compensation each to the oxygen shortage victims, the Congress leader said.

“The Government is clearly telling lies about COVID deaths. 3,27,975 people have died due to COVID between Jan. 1 and June 13 in Karnataka this year and the Government has manipulated the figures to show it as 29,000. We will seek the death audit in the next Assembly Session,” Shivakumar said.

Chief Minister B.S. Yediyurappa had avoided visiting Chamarajanagar as he was afraid of losing his seat. I feel that Yediyurappa should have visited the district and consoled the families. Since no one from the Government visited the families, the Congress has decided to go to people in grief, he said.

“Based on an intelligence report that people’s outrage could lead to tension and revolt, the CM had skipped visiting Chamarajanagar. This is also in line keeping with the legendary jinx that whichever CM visits the district, loses power. The Government knows that the public opinion is against it for its mis-handling of the pandemic. People have lost faith in the Government as it has failed to act against any officer for the oxygen tragedy,” he said.