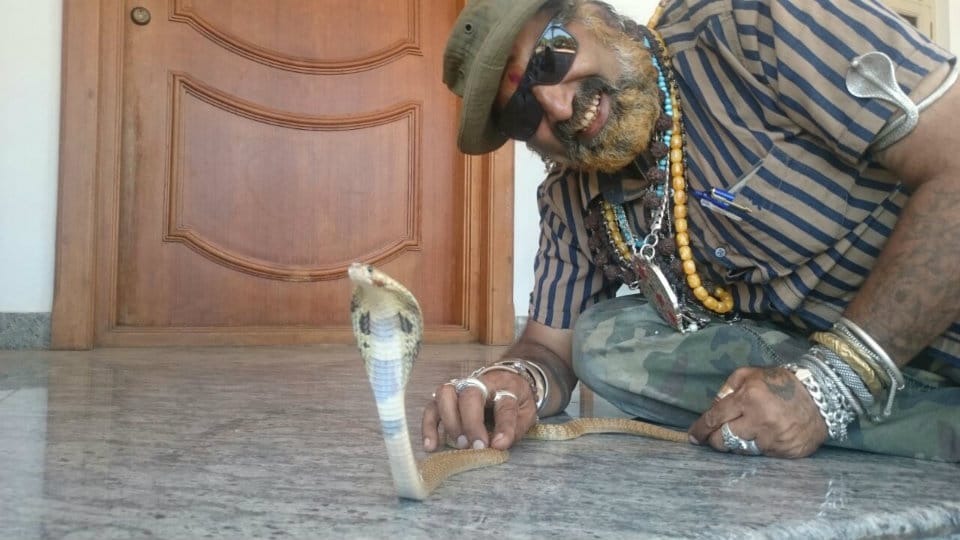 Mysore/Mysuru: City’s well-known snake rescuer and wildlife conservationist Snake Shyam, who responded to a phone call from the public about the presence of Cobra at a house near Sai Baba Mandir at Sathagalli, not only rushed and rescued the Cobra, but also pacified the woman of the house who was in a state of shock.

Yesterday at about 11.15 pm, the woman, who was staying alone at her house went to the bathroom. As soon as she switched on the light, she heard a hissing sound and turned to the direction of the sound only to see a big Cobra coiled to the tub with its hood open.

The woman managed to rush out of the house and began screaming for help. Soon, her neighbours came to know about the presence of a Cobra in the bathroom and immediately called Snake Shyam.

Snake Shyam, who not only responded to the call at the late hour, rushed to the woman’s house at Sathagalli and rescued the Cobra from the bathroom. Shyam then consoled the woman, who was weeping, provided her water and pacified her.

Had not the woman switched on the light of the bathroom, there were possibilities of the snake biting the woman out of fear and for self-defence. Shyam left the place only after explaining the people about snakes and precautions to be taken to prevent them from entering houses.