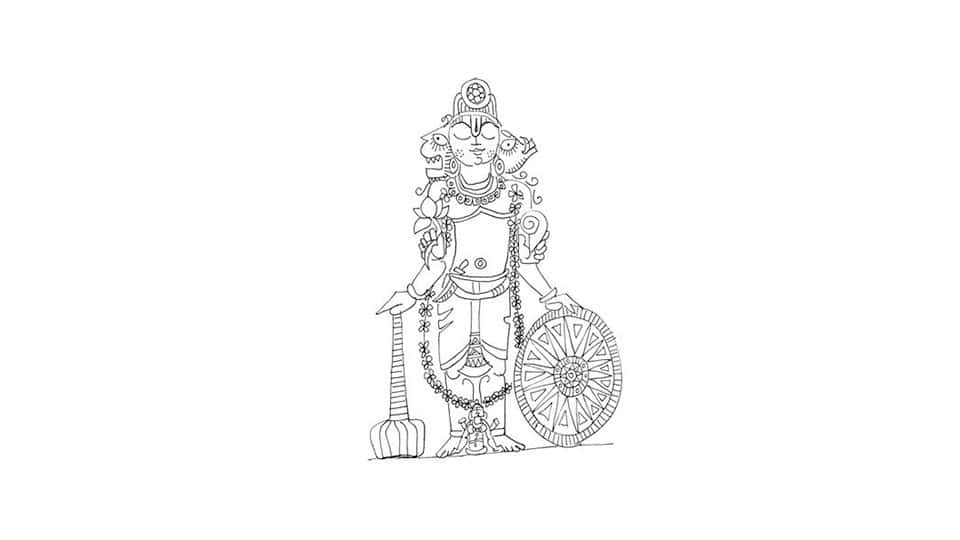 The Chaturmukha Vishnu is a very rare form of Vishnu once worshipped in Kashmir from the 8th and 9th century, when it was an important centre of Hinduism. The image shows Vishnu with four heads. Three clear faces are those of Vishnu, the Narasimha or the Lion face, and the face of the Varaha avatar. The fourth face varies according to scriptures. Different scriptures describe the fourth head as either a demonic face or the face of Kapila or the face of Lakshmi, or even Hayagriva, the horse. In artwork, sometimes, the fourth head is absent and only the other three heads are shown.

This form of Vishnu has not four, but eight arms. Four arms hold the traditional conch shell, discus, mace and lotus flower. The other four hands hold a bow, an arrow, a sword and a shield. Sometimes, the image just has four arms. The gada (mace) is replaced with the gadanari or it is personified as a woman. The chakra is replaced by the chakrapurusha, a wheel embodied as a man.

In the post-Gupta period, we find importance given to Vishnu’s weapons, symbolised in anthropomorphic forms. The gadanari is not very popular. In South Indian temples, we find many images of the Chakrapurusha, also known as Sudarshan. The vahana or the mount depicted is Garuda. He is sometimes accompanied by Lakshmi. There is no specific story associated with it. As Hinduism waned from Kashmir, this image died out and did not become popular.

In the Gupta period, imperial lines and dynasties associated themselves with Hinduism and Vishnu. Great value was given to the ‘dominating and aggressive’ forms of Narasimha and Varaha. Today, however, greater value is placed on the ‘bhakti’ forms of Ram and Krishna, whose stories are told in the Ramayana and Mahabharata. Only in Andhra Pradesh and Odisha, we find temples of Narasimha and Varaha.

There is no clear story about why Vishnu has four heads. In some places, Vishnu has only three, Brahma has four and Shiva has five heads to show their relative power. The four heads may link to Vishnu being identified as Krishna, his brother, Balarama, his son, Pradyumna and his grandson, Aniruddha.

The only place, outside of Kashmir, where this image is found, is in Khajuraho, built in the tenth century. The Lakshman temple in Khajuraho has an image of Vishnu Vaikuntha. Here, he has three heads and four hands. The only legend associated with this image is that of the creation of a monster, with the head of a lion and a wild boar. He was told that when another creature who looked exactly like him appeared, he would be destroyed. This is why Vishnu took this form to destroy it.

Today, nobody worships this Vaikuntha form of Vishnu.

In many ways, the image connects royalty to the boar and the lion, symbols of aggression and domination. The hidden face represents the aspect of kingship that will always remain hidden from the public.