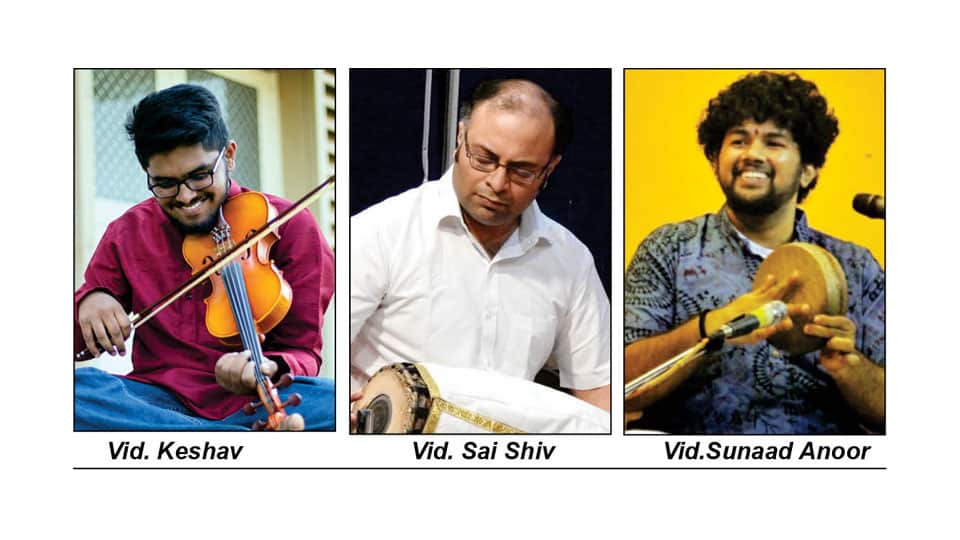 Mysore/Mysuru: Vid. Keshav Mohankumar, a highly promising young violinist from city, will be presenting a solo violin concert at the heritage house of Mysore Vasudevacharya in city, tomorrow (Aug. 7) between 4 pm and 6 pm.

He will  be accompanied by Vid. Sai Shiv Lakshmi Keshav on mridanga and Vid.Sunaad Anoor on kanjira. The concert is open to all music enthusiasts.

A disciple of Vid. H.K. Narasimhamurthy, Keshav Mohankumar is a B-High grade artiste of All India Radio and Doordarshan. Presently pursuing final year BE at NIE, Mysuru, he has taken part in National level concert series, Spirit of Youth and Global Carnatic Music Association programmes and has performed for international embassies. He has performed in around 600 concerts across South India, Maharashtra and Gujarat and has accompanied several established classical musicians.

A disciple of Vid. V. Nagabhushanachar initially, Sai Shiv Lakshmi Keshav has been under the direct tutelage of famed artiste Karaikudi R. Mani since 2006. An A-Grade artiste of All India Radio, Sai Shiv has accompanied many top artistes in performances across South India.

Kanjira artiste Vid. Sunaad Anoor is an A-Grade artiste of AIR. Having been a disciple of his father Vid. Anoor Dattatreya Sharma and uncle Vid. Anoor Ananthakrishna Sharma, he has performed with many eminent musicians in and around India, Singapore and the USA. He has toured with the Amithias project and played with the prestigious HR big band in Frankfurt Jazz Festival, Germany.