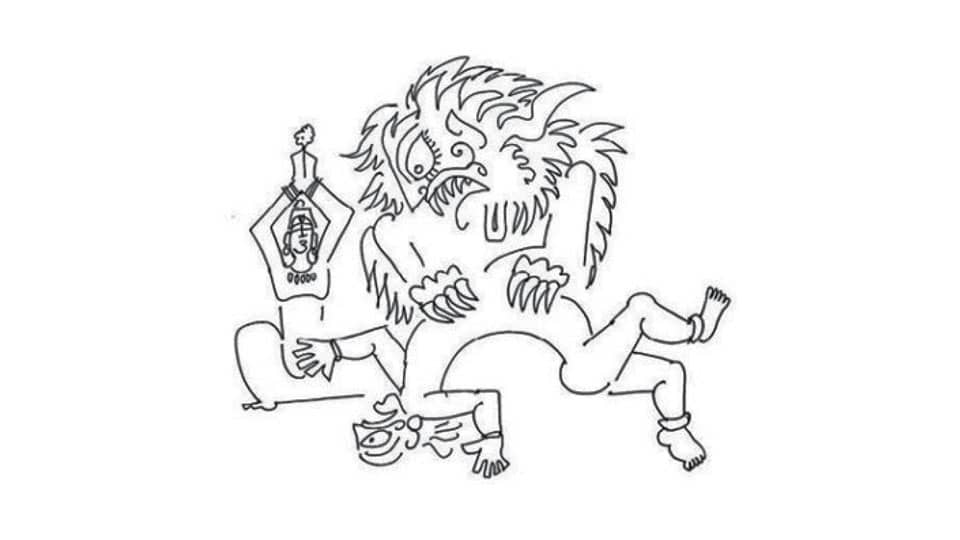 Son of an Asura

In the Vishnu Purana, we are introduced to the story of Prahalad. We are told he is the son of an Asura king, Hiranyakashipu. Because Hiranyakashipu receives a boon from Brahma, he cannot be killed by any human or animal, either inside or outside a dwelling, at day or at night. Therefore, he gains certain immortality and starts demanding everybody worship him as God. However, Prahalad refuses to accept his father as and keeps worshipping Vishnu or Narayan, and keeps saying Narayan is present everywhere, in day and night, within and without. Prahalad prefers to worship only Vishnu, chanting his name all the time.

This irritates his father to such an extent that Hiranyakashipu decides to torture Prahalad and, in different versions of this story, found in many folk literatures, there are elaborate tortures designed to make Prahalad change his mind. He is thrown off cliffs, he is put in jail, he is whipped, and he is also put in fire. There are attempts to drown and impale him, but Prahalad escapes unscathed, being rescued by Vishnu each time. Thus, Vishnu’s power is established, and Vishnu becomes the God who saves his devotees from all problems.

Hiranyakashipu gets immensely frustrated trying to find the whereabouts of Vishnu and desires to meet him. Prahalad keeps saying that Vishnu is present everywhere and in everything. Hiranyakashipu, one day, very mockingly, points to a pillar in his palace and asks Prahalad if Vishnu is present in the pillar. Prahalad, without a moment’s hesitation, confirms Vishnu’s presence there.

READ ALSO  Ram and the Rooster

Hiranyakashipu kicks the pillar and breaks it, and, to his horror, from where the pillar stood, emerges a grotesque creature, neither human nor animal. It drags Hiranyakashipu to the threshold of his palace, which is neither inside or outside, at twilight, which is neither day nor night, picks him up and places him on its thigh, which is neither above nor below, and disembowels him with its claws, which are neither weapons nor instruments. Thus, all conditions required to destroy Hiranyakashipu are met. This creature is Narasimha, a manifestation of Vishnu. Narasimha blesses Prahalad and makes him the king.

This is one of the earliest stories found in the Puranic traditions to establish Vishnu as God. The idea of God is elaborated as someone who is present everywhere and is all-powerful and protects those who believe in him. The story also shows that God can outsmart even the smartest of villains. All this becomes a simple way of explaining to the common man what God is about.

In poster art, we often see Hiranyakashipu as a monstrous being, dark in complexion, while his son is shown as a light-skinned boy. This leads to the question if Prahalad is an Asura. In the Puranic traditions, Asuras are a species of beings like humans, grandchildren of Brahma, sons of Kashyapa, just like Devas. In time, children of Brahma were given a moral flavour, with Devas being seen as the good guys and Asuras seen as the bad guys. But, if Asuras are the bad guys, what do we make of the son of a bad guy, Prahalad, a devotee of Vishnu? By demonising all Asuras as bad, aren’t we promoting prejudice against communities and stereotyping? Something to think about…