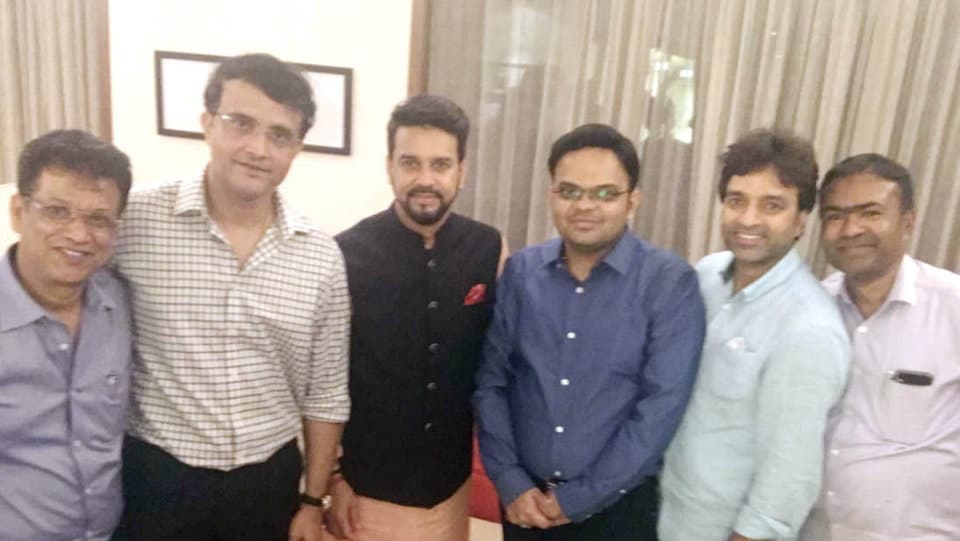 Former Indian skipper Sourav Ganguly, who will take over as President of the Board of Control for Cricket in India (BCCI) on Oct.23, tweeted a photo with his new team. “The new team at. @bcci .. hopefully we can work well .. anurag thakur thank you for seeing this through,” he wrote on Twitter.

Sourav Ganguly is seen standing with Jay Shah, Arun Dhumal and Jayesh George, who are all set to be part of his team at the Board. Former BCCI Chief, Anurag Thakur, is also in the picture.

Jay Shah, son of Union Home Minister Amit Shah, is set to be the new Secretary of the BCCI while Arun Dhumal, who is Anurag Thakur’s brother, is going to be the Board’s new Treasurer. Jayesh George will be the new Joint Secretary.

Anurag Thakur, who is currently the Minister of State for Finance and Corporate Affairs, reportedly played a big role in Ganguly getting the top job at the BCCI.

Ganguly filed his nomination for the post of BCCI President, which officially cleared the road for him to be the new Chief of the world’s strongest Cricket Board, yesterday.

Ganguly was accompanied by former BCCI Presidents Niranjan Shah, N. Srinivasan and former Indian Premier League (IPL) Chairman Rajeev Shukla as he came to file his nomination at the BCCI headquarters in Mumbai.

The BCCI elections were scheduled to be held on Oct.23 but with Sourav Ganguly being the only candidate to file his nomination for the top post of Indian cricket, he is set to be elected unopposed.

Earlier, Ganguly had emerged as the consensus candidate to be BCCI’s new President during a meeting between the State units of BCCI on Sunday night.

Ganguly has represented India in over 400 international matches, apart from leading the national side for five years.

He would bring in vast experience as a player, captain, and then, as a coach-mentor.

He was the Chairman of the BCCI Technical Committee and has been a media personality for many years.

However, former Indian captain will have to demit his post in September, 2020, as he will go into compulsory cooling off period, according to the current BCCI rules.