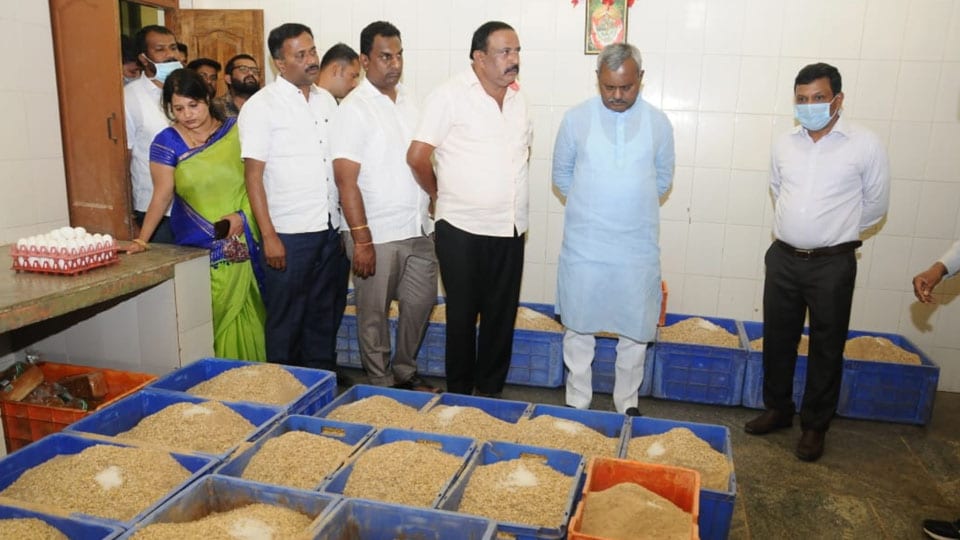 Mysore/Mysuru: Mysuru District Minister S.T. Somashekar said he would discuss with the Government whether the Zoos in the State could be given any special permission to procure beef for their carnivores with the anti-cow slaughter law coming into effect in the State.

He was speaking to reporters after visiting Mysuru Zoo last evening where officials apprised him about the running of the Zoo and how cow slaughter ban had affected procurement of beef.

The Zoo is largely dependent on beef for feeding carnivores. With the ban, beef has been replaced with chicken and here too, there were difficult times due to the threat of Bird Flu. And the procurement of mutton is an expensive proposition.

The Zoo which attracts lakhs of tourists every year houses about 35 to 40 big cats in its enclosures. It needs large amounts of beef daily — approximately 350 kgs — to feed the tigers, lions and leopards and the Zoo procures beef from certified suppliers, six days a week (not Tuesday). The enforcement of the anti-cow slaughter ordinance led to closure of beef stalls.

“Though chicken meat is fed to the animals now, we are observing for any physiological and behavioural change in the animals. At Bannerghatta Biological Park it has been observed that carnivores have gained more weight after eating chicken for three to four months. As such, experts have told us to retain beef diet and we have requested the Minister to do the needful,” said Zoo Executive Director Ajit M. Kulkarni.

Minister Somashekar said that Minister for Forests Arvind Limbavali was coming to his Constituency — Yeshwanthpur — in connection with a programme soon. “I will take up the matter with him and seek to know whether any provision can be made to ensure beef supply to the State Zoos having carnivores for their feeding,” he said.

Somashekar said he was planning to hold a civic felicitation to Infosys Foundation Chairperson Sudha Murty for her support to rejuvenate the once dead Hebbal Lake spending nearly Rs. 105 crore and also her contribution to the Mysuru Zoo to the tune of Rs. 3 crore.

“Bank Note Paper Mill India Private Limited (BNPMIPL), Mysuru, under its Corporate Social Responsibility (CSR) activity, has donated Rs. 70 lakh to Mysuru Zoo for the construction of orangutan enclosures. I will discuss with officials the possibility of securing more and more CSR funds that can enable smooth running of the Zoo,” he said.

“The Zoo was in a crisis following its closure during the lockdown and though it is yet to get back the same number of visitors post-pandemic, there has been a marginal improvement and the Zoo’s revenue is also recovering,” he said.

Somashekar said the Zoo’s annual gate collection was around Rs. 59 crore which dropped to Rs. 17 crore because of the impact of the pandemic.  “Those who had adopted animals under the animal adoption scheme during the lockdown to support the Zoo financially will be encouraged to renew their adoption,” said the Minister.

It may be recalled here that Somashekar had played a key role in getting funds from his Constituency and also from other Constituencies represented by other Ministers at a time when the Zoo was facing serious revenue crisis.

The Minister later visited the food storage units of the Zoo and its hospital. He later viewed a documentary of the Zoo at the Zoo auditorium. Additional Principal Chief Conservator of Forests B.P. Ravi, who is also the Member-Secretary of Zoo Authority of Karnataka (ZAK), ZAK Chairman L.R. Mahadevaswamy and others were present.

3 COMMENTS ON THIS POST To “Special permission needed for Zoo to procure beef: Minister”