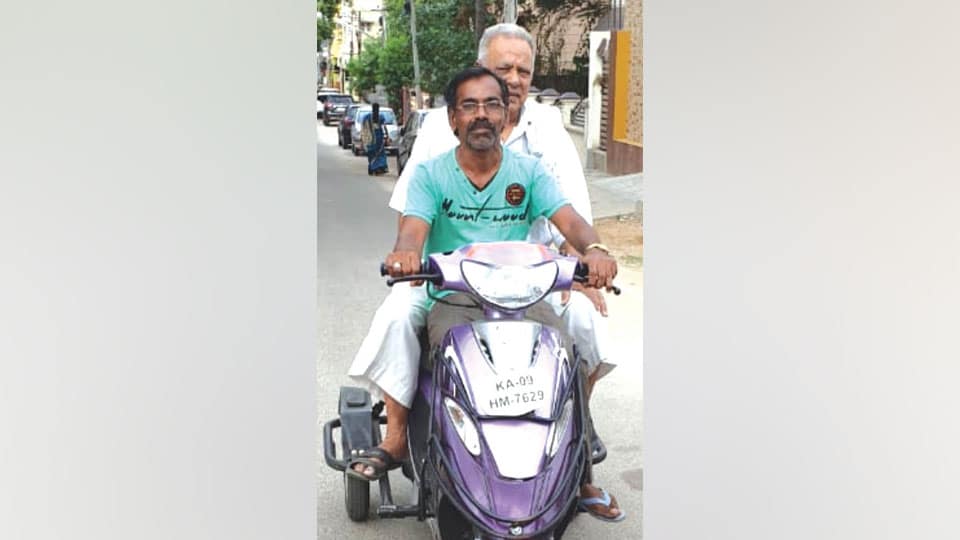 Mysuru:  The poor voter turnout in the Bengaluru Lok Sabha constituencies where the techies speak big but do little when it comes to voting, has become the subject of much discussion in social media and on television.

However, just to prove the big talking people wrong, a photo of a physically challenged person, a resident of Mysuru taking a pillion, who is a senior citizen, on his three-wheeler, has gone viral.

It is mostly the persons with their hands, legs and eyes in normal condition who refuse to walk that extra mile to the polling booths to cast their votes showing total apathy to the democratic process. But this photo must make them bow their  heads in shame.

Mysuru Ward 51 Corporator B.V. Manjunath has got a retrofitted scooter from the Mysuru City Corporation to Agrahara resident and specially-abled person Kumar. Since there was election on Apr.18, Kumar used his own vehicle, filled it with petrol from his own money and rode to the polling booth in Srikantha Women’s College, Agrahara.

Seeing an elderly person on the way, he also picked him up and brought him to the polling station on his three-wheeler.

“It is not enough if I cast my vote. It is also my responsibility to bring others who are elderly and weak to the polling booths. I have just done what I needed to do,” said Kumar thus earning appreciation from the public for his good deed.