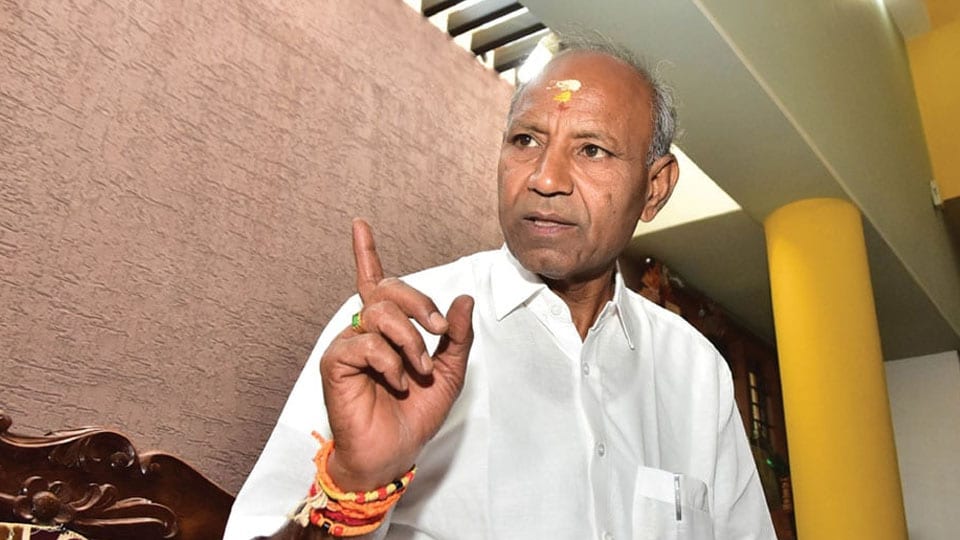 Mysuru:  Two days after the LS polls, JD(S)-Congress coalition candidate from Mysuru-Kodagu Lok Sabha Constituency C.H. Vijayashankar of the Congress, who is also a 2-term former MP, has expressed confidence of  his victory.

Addressing a thanksgiving media conference at Patrakartara Bhavan here yesterday, Vijayashankar said that according to the inputs he has got from Congress workers, he will do well in NR, Periyapatna and Hunsur assembly segments.

Also, the low voter turn out in KR and Chamaraja assembly segments, which are considered a BJP strong hold, would help him. Reiterating that he was very much confident of his victory, the Congress candidate said that he was in constant touch with the people even when he was not in power and this had bolstered his chances.

Pointing out that the people know his character very well, he maintained that he was not questioned by the public anywhere during his campaign in the run up to the polls.

Noting that he joined the Congress from the BJP only last year, Vijayashankar said, although there were several aspirants in the Congress, they all worked for him after the Congress high command announced his candidature from Mysuru-Kodagu LS seat.

Thanking the officials of all Departments and the Police for having systematically conducted the polls, the Congress candidate said that the polls were held in a peaceful manner, thus upholding the dignity of democracy.

Stating that the people have actively participated in the polls, he again thanked the District Administration and all others for smooth and peaceful conduct of polls.

Expressing disappointment over some people making allegations on the quality of indelible ink, he said that the ink provided by Mysuru Paints and Varnish Ltd. (MPVL) was of international standard and one need not have any doubts about its quality.