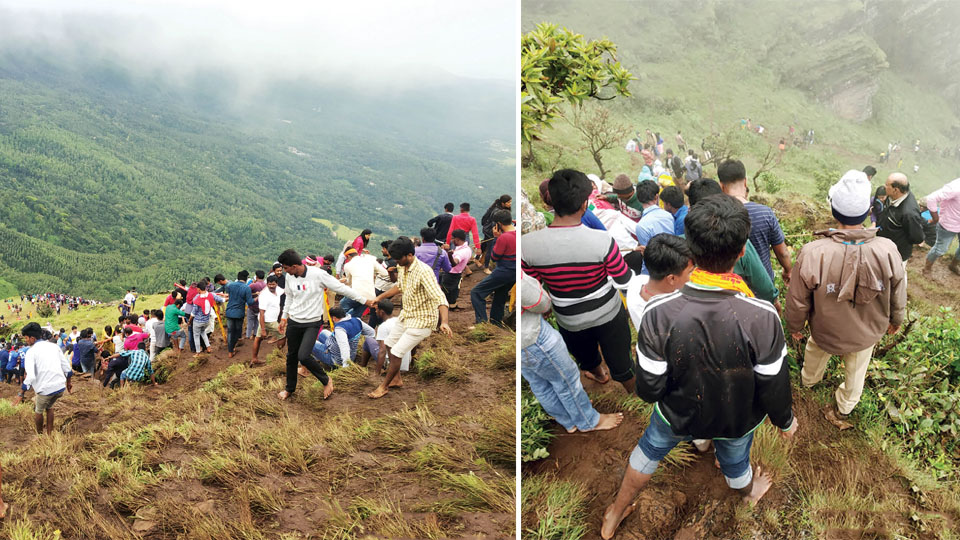 SPIRITUAL TREKKING: Where every devotee turns a trekker

Amidst the montage of people, there exists a divine circuit of hundreds of pilgrims who dedicate their entire life to a journey to wash away their sins and seek the blessings from the deity whom they worship. India is a holy land which unites people as they go for long treks across the country which is dotted with pilgrimage sites of various religions.

Over the years, spiritual treks have gained popularity which cover the length and breadth of the country beginning from Amarnath in Kashmir to Tawang Monastery in Arunachal Pradesh and many more. Pilgrimage is act of devotion. In many religions, these sacred treks are prescribed, even considered a must in one’s lifetime, and followers from all of world’s major faiths make holy pilgrimages.

High mountains offer one the best place of tranquillity and meditation. Smaller hills can also mesmerise one and tempt to go for spiritual trekking to a nearby hill to relax and enjoy the comforts of peace of mind and body.

One rather unknown spiritual trekking destination that leads an individual to a mountain that is 3,000 ft. above sea level is Deviramma Betta in the scenic Chikkamagaluru district. Here, a trekker traverses through a rocky and steep path on one particular day of the year — the Deepavali Day. Nobody ventures here during the rest of the year. So, what pulls devotees/ trekker to Deviramma Betta?

When Goddess Chamundeshwari calmed down from her ‘Raudraavataara’ atop Hill

Mysuru got its name from Mahishasura, the demon king who was killed by Mahishasura Mardhini Chamundeshwari, the presiding deity of Mysuru. While legends and spiritual texts describe how Goddess Chamundeshwari in her “Raudraavataara” defeated and killed the demon king (the event is celebrated as Navaratri or Dasara as victory of good over evil), not many know what happened after the killing.

Legend says that after killing Mahishasura, Goddess Chamundeshwari, to calm down her anger, went away from the reach of everyone to make sure that nobody was destroyed by her anger and stayed put atop a hill in Chikkamagaluru giving it the name Deviramma Betta        (Deviramma, incarnation of Goddess Chamundeshwari).

Like Dasara pulls a large crowd towards Mysuru, Deepavali has been attracting over a lakh devotees every year towards Chikkamagaluru for the annual Deepotsava at Giri Deviramma Temple (Deviramma Temple atop the Hill) in Bindiga Mallenahalli village.

The speciality of the festival here is that the Hill Temple is visited only once a year on the first day of Deepavali, the Naraka Chaturdashi Day. However, there is another Deviramma Temple at the foothill that is open throughout the year. It is believed Deviramma or Goddess Chamundeshwari will be on top of the hill for only one day and she will be at the temple in the village during the rest of the days throughout the year.

People in the town celebrate Deepavali by bursting crackers and lighting lamps at their houses only after the light is lit atop the hill. Devotees from across the State and neighbouring States visit the hill temple by trekking barefoot amidst greenery to get the blessings of Goddess Deviramma. Many devotees start climbing the hill in the middle of the night to avoid rush and come down before Sun turns hot. As per practice, devotees fast during the trek as they consider this feat as holy.

The land of coffee, which is a trekker’s paradise with its serenity, soothed the anger of the Goddess and this is a firm belief among devotees. The Goddess, after gaining her composure, to facilitate darshan for devotees, came down the hill and sat down at the foothill temple, says legends.

The Temple atop the hill has no doors or walls but people voluntarily don’t venture to the place on other days. On Naraka Chaturdashi day, wooden pieces/ logs are carried by the devotees on top of the hill and later during the evening, at around 7 pm, they are used to light a huge fire.

With the number of devotees increasing each year and difficulty in climbing the hill, in order to avoid the trouble caused to other devotees while carrying logs, instead of devotees, villagers themselves carry the logs on top of the hill early in the morning for the bonfire. However, devotees can carry camphor or incense sticks or tiny wooden pieces for the same.

After darshan at the temple, devotees head towards the foothill temple and wait to see the bonfire being lit atop the hill. In the town, people perform arathi facing the hill and then begin Deepavali celebrations.

On the Amavasya day that follows Naraka Chaturdashi, the doors/ curtains of the foothill temple which is closed after the morning puja will open on its own, signalling that the Goddess has returned from the hilltop to the foothill temple. This is a faith that is still prevalent.

During the rule of Mysore Wadiyars, Deepavali celebrations at Mysore Palace used to begin after the light is lit atop Deviramma Betta. According to villagers and trekkers, Mysore Wadiyars used to send ghee, oil and other puja-related materials (seve) to the hill temple for the rituals. However, when Star of Mysore contacted the member of erstwhile royal family, Pramoda Devi Wadiyar, she said that she has no idea about Wadiyars sending puja materials to the Deviramma Temple.

Fear of landslips keeps devotees away

Since decades, Giri Deviramma Temple has been attracting nearly lakh devotees every year on Naraka Chaturdashi Day. However, this year continuous rains rendered the already steep terrain a more risky place with loose soil and a slippery path. Hence devotees visited the hill shrine only after 4 am instead of walking in the night. In an advisory issued on Oct.25, 2019, Chikkamagaluru Deputy Commissioner Bagadi Gautam said that there could be chances of landslips. Probably this notice and other videos uploaded on social media resulted in the number of devotees being reduced to half this year.

How to reach there

The Deviramma temple is located on Chandra Dhrona Hill Ranges of the Western Ghats of Chikkamagaluru taluk, nearly 30 kms from Chikkamagaluru.

The foothill temple is in Mallenahalli. It’s a serene place with Mullayanagiri — the highest peak in Karnataka, Bababudangiri — the place which is famous for religious harmony with the shrine to the Sufi saint Hazrath Dada Hayat Khalandar, a pilgrimage site for both Hindus and Muslims and the Deviramma Betta in the backdrop.

One can easily reach the foothill temple by vehicle. For Deepotsava, KSRTC too deploys additional buses from Kadur, Tarikere Birur and Chikkamagaluru to Mallenahalli. However, to reach the Deviramma Betta, one has to walk around 8 kms from the foothill temple or if vehicles are allowed, one can reach till Inam Dattatreya Peetha (as vehicles are restricted during heavy traffic) and trek to reach the peak of Deviramma Betta.

Top Spiritual Trekking spots near you

Antharagange is a great place if you are looking for a place not far from Bengaluru for some adventure of the outdoor kind. Located in Kolar, this place has a temple and unlimited stocks of boulders. It will take 90 minutes on a bike to reach the place through Old Madras Road in Bengaluru.

The temple belongs to Kashi Vishwanath which is reached after climbing over 350 steps. The highlight of this temple is the pond which gets water from perennial underground spring.

This temple is located underneath a huge, white coloured rock. The temple priest lives near the temple and is the only person living at the peak.

Every year, pilgrims from the surrounding area climb this hill to celebrate a festival at the Rangaswamy temple.

Kunti Betta is located at a distance of 7 kms from Pandavapura, 14 kms from Srirangapatna. This place Pandavapura was named after the Pandavas who had been here during their exile days.

Kunti Betta is marked by two rocky hills at an altitude of 2,882 feet. These rocky hills are surrounded by sugarcane, paddy fields and coconut trees. There is a temple with a pond at the foot of the hill which serves as a popular destination for pilgrims.

At a distance of 135 kms from Mysuru, 89 kms from Hogennakal, Male Mahadeshwara Betta, also known as M.M. Hills, is a sacred place situated in the eastern parts of Kollegal taluk in Chamarajanagar district. It is situated at an altitude of 3,000 feet.

The unique feature of the hill is that it looks like a bull from the East, a Ganesha from the West, a Linga from the South and a cobra from the North. A set of well-laid steps will lead you to the top of hill where the shrine of Gavi Gangadhareswara Cave temple is situated.