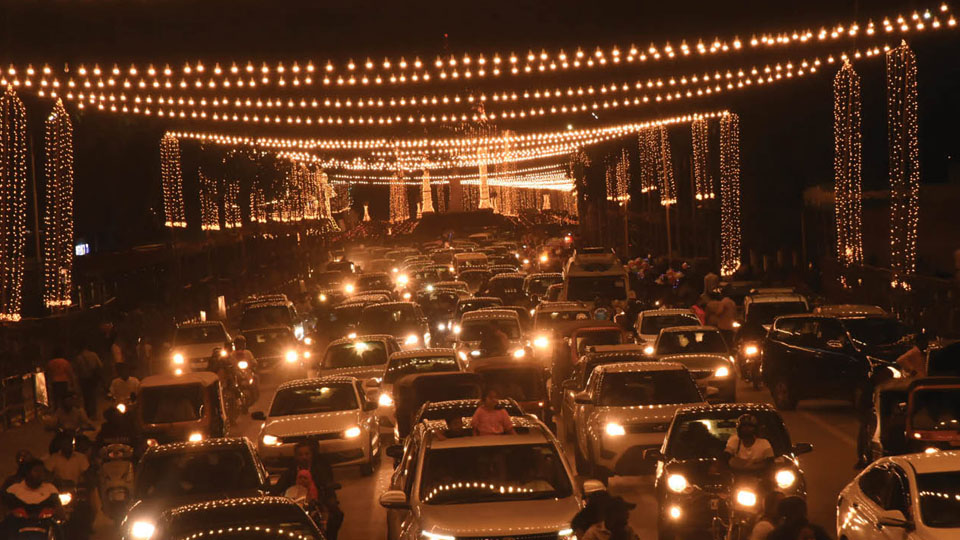 This year the Dasara lightings of all main roads, Circles and Government buildings are really splendid. For a change, this year we can see more artistic illumination, especially on Kuppanna Park Road and the road leading to the Regional Commissioner’s  Office (Hunsur Road).

Compared to all the previous years, this year the authorities have deployed more Police force who are sincerely working to regulate the vehicular traffic and the pedestrians’ movement.

Also the one-way regulations on many roads have de-congested the traffic, especially opposite mofussil bus stand.

I think this one-way routing near the mofussil bus stand can be implemented permanently  to de-congest this area.

This year both the KSRTC bus stands have disappointed the public by not illuminating their buildings.

On 27th around 9 pm, there was a huge piling up of vehicles at the centre of Devaraj Urs Road, because of the carelessness attitude of the staff of the illumination contractor.  A jeep with  a telescopic ladder was stationed  right in the middle of this road, repairing one line of lights. The workers were repairing lights unmindful of the traffic jam they had caused owing to their foolish act.

At no point of time the illumination contractor should be allowed to conduct repair or service of the lights between 7 pm and 11 pm. The authorities concerned should ensure that public are not forced to face  such inconvenience.

Voice of The Reader
Provide proper street-lights on Outer Ring Road
A rare feast for the eyes and soul!