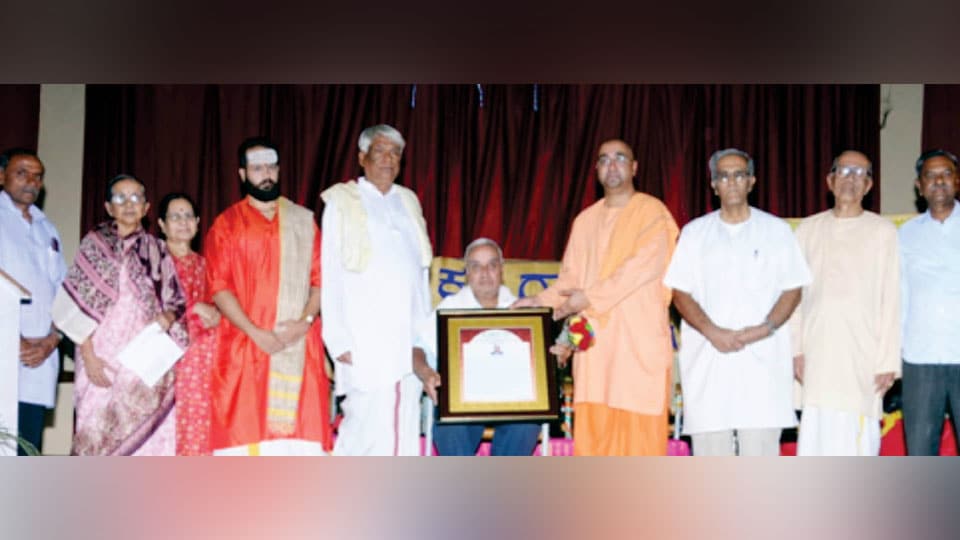 Sri  Atmajnananandaji Maharaj  of Sri Ramakrishna Ashram, Yadavagiri, who inaugurated the celebrations, was the first one to be honoured by the Sabha. The Swamiji was introduced by Renukadevi, Treasurer of the Sabha.

This was followed by felicitation to former MLC D. Madegowda, who was introduced by Prof. K. Basavegowda, describing him as ‘Mane’ Madegowda as he had allotted houses to shelterless and sites to the siteless poor people in a short span of one-and-half years  as  Chairman of CITB (now MUDA).

Muktaka Sahitya Academy President S. Ramaprasad was also felicitated on behalf of the Sabha with a citation, shawl, bouquet and fruits by the Swamiji and dignitaries on the stage. The citation was read out by  Dr. M.R. Bharathi.

Sridhar Raj Urs in his Presidential remark recalled his close association with Sri Ramakrishna Ashrama since he became the Principal of Maharaja’s Junior College in 1975 through Swami Sureshanandaji, Sri Somanathanandaji (was a student of Maharaja’s high school), Swami Nityastanandaji,  Swami Muktidanandaji and the present Swamiji.

Urs further said that Madegowda is not only famous as ‘Mane’ Madegowda but also for his waste management unit in Kumbarakoppal Extension.