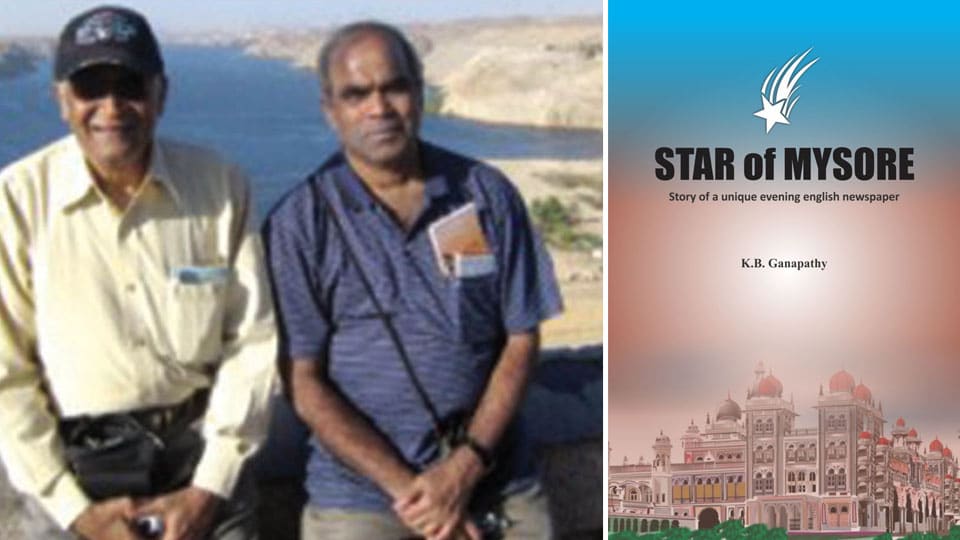 Trials and Tribulations of a Newspaper Editor

K. B. Ganapathy, the author of Star of Mysore: Story of a unique evening english newspaper, is a close friend of mine. So, if you are looking for an objective review of the book, I suggest that you look elsewhere. If what I have penned below reads like an unabashed accolade, I plead guilty as charged. It’s my way of showing my greatest appreciation for what my friend has achieved, both as a journalist and as a businessman.

The subtitle of the book could as well be The unique story of a successful journalist who also made it as a businessman. They say, “You can either be a journalist or a businessman. You can’t be both.” As a person whose one and only experiment in straddling the two professions flopped in less than two years, I can vouch for that. But Ganapathy is one of the rare exceptions. This book can be presented as Exhibit A to make the case against those naysayers.

Ganapathy and I met as journalism students at the Bharatiya Vidya Bhavan (BVB), Bombay (now Mumbai), in the late 1960s. What began as a nodding acquaintance between us developed into a strong friendship over the years. It did not mellow one bit even after we moved on and started living continents apart: He lives in the Southern Indian city of Mysuru and I, in New York.

In our early days in journalism, we were always broke. Rookies in journalism were paid pittance in those days. Though broke, and at the bottom rung of our career, our desire to excel professionally knew no bounds. When our career path seemed headed for a dead-end, we started entertaining the idea of leaving socialist India in search of greener pastures in the capitalist West. In his impatience to rise, Ganapathy even switched his career to advertising, as an Account Executive, for a short period.

While working at a leading advertising agency in Bombay, he spotted an ad from a Kuwait-based firm looking for an Account Executive. Though a Gulf emirate is far from ideal for a steadfast believer in civil liberties and freedom of the press, he decided to apply for the position. His plan was to use Kuwait as a springboard for his eventual hop to the West, preferably the US.

He was ecstatic when, at the end of the interview for the job, he was told by the representative of the Kuwait advertising agency that he would receive the appointment order in a few days. I remember celebrating the joyous outcome over a drink at the auntie’s bar (speakeasy) near our bachelor pad, which we shared with another journalist friend, the late Colin de Souza.(In those days of farcical prohibition, most speakeasies in Bombay were operated by elderly Goan women. Hence our reference to them as aunties’ bars.) The Goan feni was our favourite and affordable drink in those days.

Ganapathy quit his job at the Bombay ad agency the very next day. His relationship with his immediate boss at the agency had soured by then, anyway. So, he did the quitting with gusto. The fact that he would have to wait only for a few days to start on the new job was another reason for the hasty decision.

Alas, as ill-luck would have it, the few days turned into a few weeks, and there was no news from Kuwait. After a month’s frustrating wait, he made inquiries through an independent source on what was happening. He was crestfallen to learn that the agency had reneged on its promise to hire him. He had no recourse to legal action because there was no commitment in writing.

I was with him in our bachelor pad when he received the numbing news. He and I sat there, he staring out the window and I staring at the wall and occasionally glancing at him. Neither of us uttered a word. After several minutes, I was able to persuade him to get out of the place and “join me for a walk.” He knew what I had in mind. Without a moments’ hesitation, he followed me. We were headed for the auntie’s bar. At the bar, after several minutes’ silence, sipping feni and munching potato chips, he managed to utter these words: “If I had any inkling of this, I wouldn’t have resigned the job in such a haste.”

In a few more days, he announced to me and Colin the next major decision he made in his life. The decision was to leave Bombay for good, move to Poona (now Pune), and start all over again from scratch. That was the end of our Bombay life together, sharing everything, except sex (both of us are straight) and dirty private thoughts. 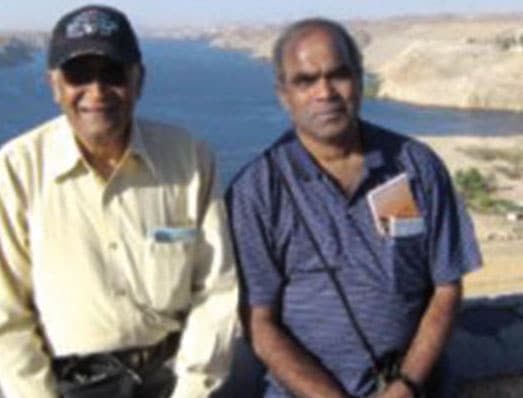 By the time we reconnected, both Ganapathy and Star of Mysore, the newspaper he started on February 16, 1978, had become household names in Mysuru, a city in Southern India with a rich history and a population of over a million. I recalled that fateful evening in Bombay when he received the heartbreaking news from the Kuwait ad agency and thought to myself: “That was the best thing that happened to him in his life.” Of course, his success is also attributable to his ability to see challenge in every crisis and his willingness to take risk. Not that all risk-takers have been successful. But without taking risk, none has achieved anything worthwhile in life.

If crises in life make one stronger, Ganapathy is a living proof of that. Refusing to be dissuaded by “the fear of the unknown” (which he talks about in the book), he ventured into newer and newer areas. Star of Mysore, which has been lighting up the media skyline of Mysuru every evening for 40 years now, is the outcome of one such venturing. The book of the same title that he has brought out now gives us an idea of the trials and tribulations he went through in making the paper the leading English daily of the city.

“Finances of the firm used to be tight” in its early, formative years, he says in the book. On one occasion, he had the humiliating experience of being subjected to this nasty remark by an angry employee who did not get his salary on time: “If you can’t pay wages, why employ us?”

On another occasion, a report in his paper — that the Liberation Tigers of Tamil Eelam (LTTE) “planned to sabotage the Mysuru-Chamarajanagar Railway line” — made the Mysuru Police furious. The reason? The report, which turned out to be based on bogus tips, had “made the Police sweat out from early morning till afternoon searching for [the non-existent] bombs.” They found a creative way of punishing Ganapathy: They descended on his house in full force at 10 o’clock at night, saying that they “had intelligence report that LTTE had planted bomb” in the house. The Police made Ganapathy and his family get out of the house and remain on the road until they completed the search. By the time the search was over, at one o’clock in the morning, Ganapathy was convinced that the search was in retaliation for the LTTE story that was erroneously published in his paper. It was alluded to by no less a person than the head of the Police team that conducted the search.

READ ALSO  Modi’s march of victory: Here is the checklist for five years...

The book also has some blood-chilling sections that discuss how some stories in the paper even endangered Ganapathy’s life and how he “was saved by the timely and effective intervention” by a politician-friend of his. Of course, the politician, Shankaralinge Gowda, was showing his gratitude for the help he received from Ganapathy and Star of Mysore in his rise in Mysuru politics.

Episodes narrated in the book add to its readability. The “Prologue” to the book also gives some clues to Ganapathy’s work ethic and management style, which are influenced by David Ogilvy, “the wizard of advertising.” According to Ogilvy, as quoted in the book, “the best results are produced by men and women who don’t have to be told what to do.” Ganapathy considers himself lucky that he is blessed with such men and women as heads of the paper’s “five critical departments.” They are: Meera Appaiah – Editorial; T. S. Gopinath – Circulation; Maria G. Fernandes – Advertising; K. Kumar – Printing; and H. P. Prasad – Accounts.

Any institution in which the boss micromanages everything and refuses to delegate responsibilities doesn’t survive the boss. Ganapathy has taken care to make sure that such a fate doesn’t befall Star of Mysore. Aware that he, like me, is over-the-hill, he has put his two sons, Vikram Muthanna and Mickey Bopanna, at the helm of the ship, and is contemplating retirement. Before disembarking, he has this to say to his two sons: “Follow the advice of Ferdinand Magellan, Portuguese explorer, ‘The sea is dangerous and its storm terrible, but these obstacles have never been sufficient reason to remain ashore.’”

P. Prabhakaran is the Editor and Publisher of The East-West Inquirer, an online monthly published from New York. email: [email protected]

NOTE: I thank Prabhakaran for dissecting the book with his immaculate language and admirable precision like what an experienced surgeon does with his scalpel. However, I would like to mention that the Kuwait Ad Agency did not renege as Prabhakaran has written. In fact, the Arab Advertising Agency Limited, Kuwait, was highly co-operative and understanding of the delay on my part in providing one document from the Police. When everything looked good, Jordan war started and first I was telegraphically informed to wait and later expressed inability to get me visa as the war prolonged. – KBG