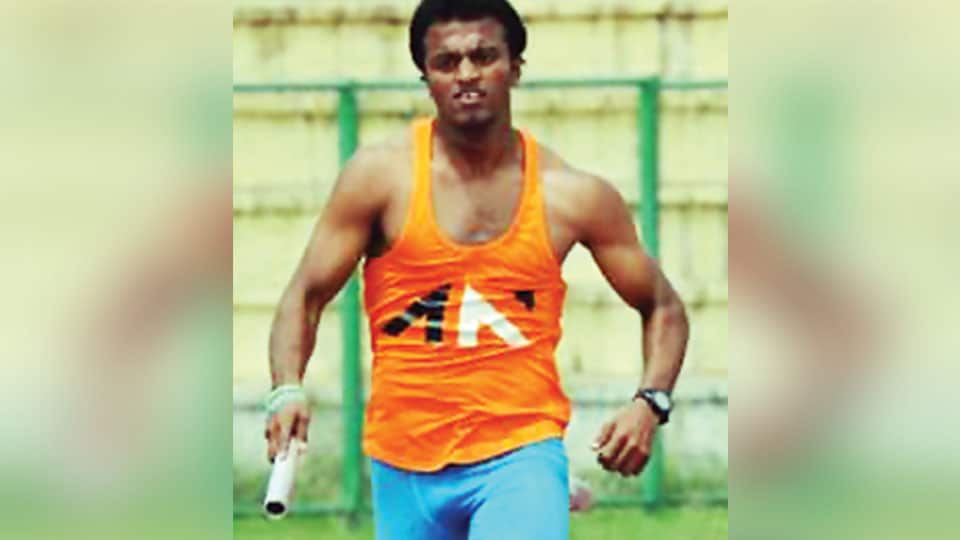 Athletics is considered as the Mother of all Sports. Our city athlete M.G. Radesh is a talented athlete who excels in the shorter sprints (100m event) in the men’s section and has been performing consistently well in the State and National level meets. Radesh recently took part in the Open Nationals at Coimbatore and performed well in the 100m event. He was recently selected as the Best athlete of the year in the district for 2016 and was awarded the prestigious ‘Nandi Award’ for his performances in the National and State-level in the 100m event in the men’s section. He is our ‘Star This Week.’

Radesh is the son of Gopinath, DYSS & SAK Kho-Kho Coach at the Chamundi Vihar Stadium, Mysuru.  Radesh, 23, won the gold in the Karnataka State Olympics athletic event held at Dharwad recently with a timing of 10.65s in the 100m for men. He also won the gold in the 100m event in the State Senior Athletic Championship held at Sree Kanteerava Stadium, Bengaluru, recently. Radesh is a dedicated athlete and practices at the Chamundi Vihar Stadium in our city. He represents Mysuru district in the State-level meets and has brought laurels to the District with his performances in the State and National level. He intends to improve on his timings and bag gold in the National level in the 100m event in the men’s section in the days to come.

He has taken part in Dasara State-level meets and has performed well. Radesh was chosen as the Best Athlete in the men’s section by the Mysore District Athletic Association and was awarded the prestigious ‘Nandi Award’ along with a cash prize which was presented at a function held at Maharaja College’s Centenary Hall recently.