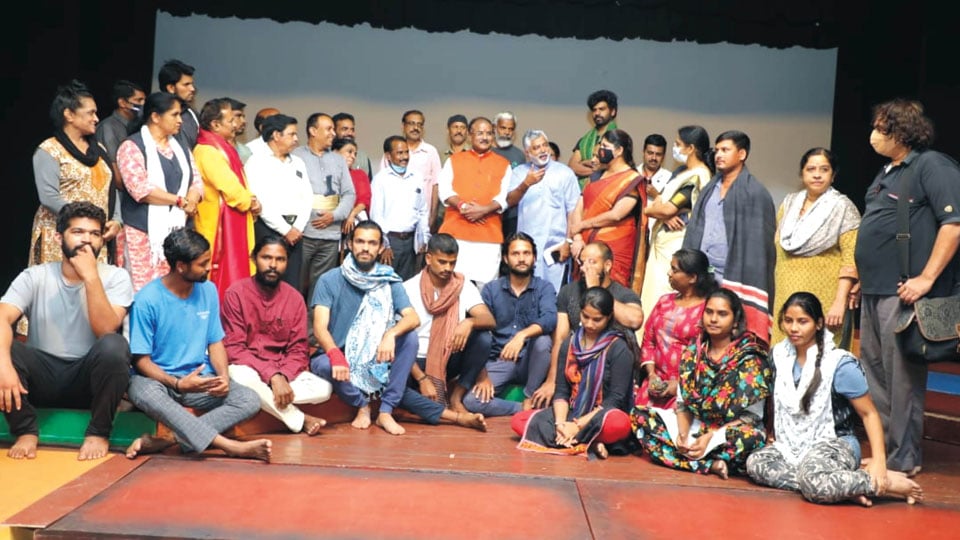 Mysore/Mysuru: Minister for Kannada and Culture Aravind Limbavali said that Karnataka will have four more Rangayanas in addition to the existing four. He was speaking to press persons after witnessing scenes of  the  rehearsal of the play adapted from acclaimed writer Dr. S.L. Bhyrappa’s novel ‘Parva,’ which is being practiced at Rangayana here on Thursday.

Pointing out that four Rangayanas are currently functioning at Mysuru, Shivamogga, Dharwad and Kalaburagi in the State, Limbavali said that two more Rangayanas are under construction while two more will come up shortly, thus making a total of eight repertories.

Declaring that Rs. 50 lakh has been sanctioned  by the Government for ‘Parva’ play as promised earlier, he said that the play must be staged throughout the State and also at places across the country where Kannadigas live in large numbers.

Assuring  that he would appeal the CM to allot more funds for ‘Parva’ play in the State Budget, Limbavali said that he would take steps for infrastructure improvement at Rangayana and suggested Rangayana authorities to involve more youth in theatre activities. Earlier, the Minister was welcomed with theatre students performing ‘Kolata’, after which he viewed the rehearsal of ‘Parva’ play going on at Bhoomigeetha.

Fellow artiste Hulagappa Kattimani, who said that ‘Sri Ramayana Darshanam’ and ‘Parva’ were top novels of Kannada and the Government should sanction funds to perform these two plays across the State and in select parts of the country.

Aravind Limbavali got upset when Cariappa told him that Rangayana staff were not paid salaries for the past five months. The Minister told Cariappa that he should have raised the issue only at the appropriate platform and asked him to come over to his (Limbavali) office at Bengaluru to discuss the issue.