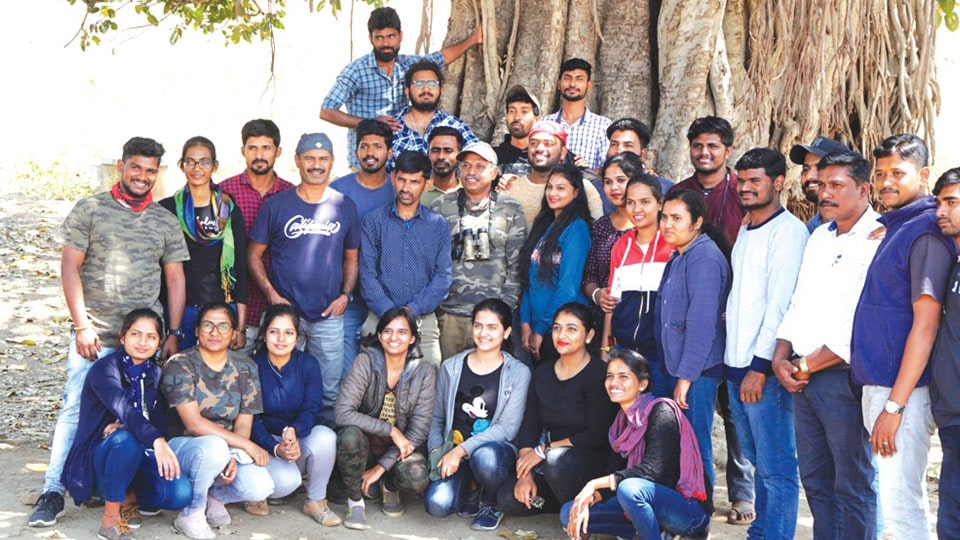 ‘Human-animal conflict cases on the decline in forest fringes’

This was as part of ‘environment awareness’ camp organised on behalf of Wildlife Conservation Foundation for 30 final year students of Mass Communication recently to understand the importance of protecting flora and fauna.

Speaking on the occasion, Rajkumar D. Urs, Head, Wildlife Conservation Foundation, said protection of forest wealth was not just the duty of officers but also of everyone. People must join hands with the Forest Department in conservation of flora and fauna. It was happy to note that students of Journalism have participated in this camp. One must develop interest towards birds-animals from the childhood days and to watch them in their surrounding areas. This would help to give priority for protection of nature and wildlife in the coming days,  he added.

Urs said cases of human-animal conflict on the forest-bordered villages have now reduced when compared to a few years ago. Farmers have stopped cultivation of agriculture land adjacent to forests fearing damage by wild animals. In the meantime, taking cattle for grazing in degraded land was risky due to possible attack of wild animals from the bushes. This would lead to human-animal conflict.

The Foundation has divided the villagers of Mangala, K. Colony, Kaniyanapura and others in Bandipur National Park into three to four groups and fenced the agriculture land to prevent wild animals from raiding the crops. This had helped farmers to grow the crops without the scare of wild animals, he said.

Public toilets have been provided near the human habitation to check death of villagers while going out to attend nature’s call.

He pointed out that many believe that fire breaks out in forests due to rubbing of trees during summer and lightning in rainy season. But, more than 90 percent of forest fire was man-made. A number of programmes had been held to create awareness among people. Of late, it was happy to note that youths from forest-bordered villages were voluntarily working with Forest Department personnel in fire fighting exercise.

P.K. Anil Kumar, a volunteer of the Foundation, accompanied students for the bird-watching.

M.T. Yogesh Kumar (MTY), senior reporter, Star of Mysore and Mysuru Mithra, who spoke on the topic ‘Role of journalists in wildlife conservation’ opined that indicating the cost of seized materials from thieves involved in forest-related offences would prompt others to indulge in such crimes. It was wrong to blame any animal in human-animal conflict as it would instigate people, he added.

Kumaraswamy, Gowtham Devanur and Nishitha Krishnaswamy, Department lecturers and others attended the camp.