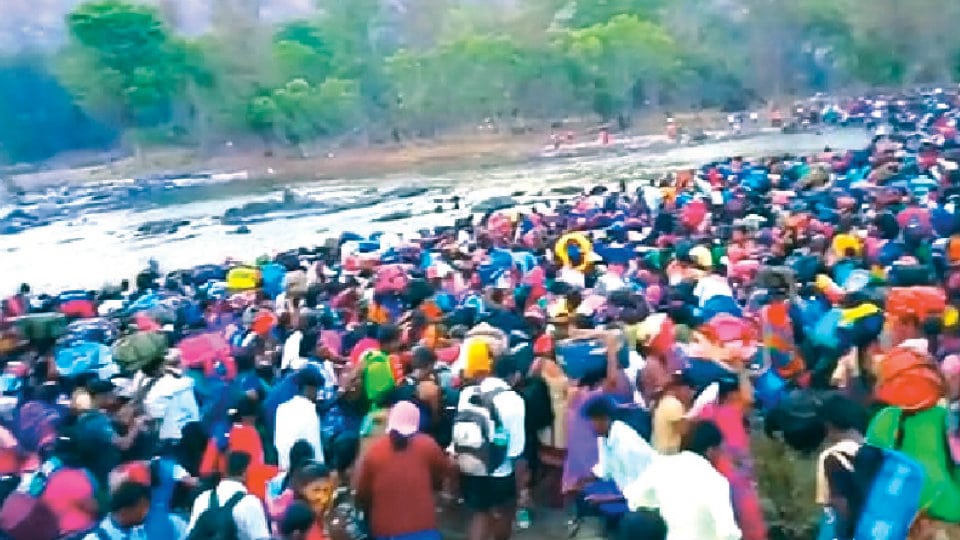 The Sanctuary, that is a new Tiger Reserve in the State, is fast drying up due to summer heat. Since the last three days, the Sanctuary is seeing thousands of devotees trekking 6-7 km to reach the Shiva Temple atop MM Hills.  Authorities are ensuring that the devotees do not keep any lighted incense sticks on the forest floor or dump food and plastic waste on their way to the Temple.

Devotees from far and wide some from even the neighbouring States, come to the Hill to take part in the Jathra held from Feb. 20 to 24. As it is a challenge for the Forest Department to control forest fire and the surging crowd, every year, volunteers from Bengaluru and Mysuru get together to prevent any forest fire. Volunteers are deployed throughout the route from Talabetta all the way to the Temple.

A series of forest awareness camps are being held to bring in awareness amongst devotees. A few makeshift platforms have been erected for the devotees to place the lit incense sticks while bamboo baskets have been installed for disposing waste.

A total of 500-km fire line has been created this year to prevent fire. The Male Mahadeshwara Wildlife Sanctuary, which is spread over 906 sq-km has 40 anti-poaching camps, seven zones in three sub-divisions and a 500-km link road has been made to transport the staff in case of emergencies. During fire season, 110 watchers, 160 camp watchers and 30 Departmental staff will work in tandem to protect the forest.

With a total population of one lakh, there are 25 villages inside the forest and 35 villages in the forest border. There are more than 1.5 lakh domestic animals in these villages. The Wildlife Sanctuary has over 15 to 20 tigers, more than 600 elephants, thousands of deer and other wild animals. Forest personnel are closely monitoring various zones of the Sanctuary like Hanur, Pijipalya, Hoogyam, Ramapura, Male Mahadeshwara Hills, Palar and Kollegal.

As the population of tigers have increased in Bandipur and Biligiri Rangana Betta (BR Hill) Tiger Reserves, tigers are moving to MM Hill Wildlife Sanctuary in search of newer territories and mates. As this Sanctuary has become a perfect place for the tigers to breed, the State Government announced the Sanctuary as a Tiger Reserve last year.

Taking all this into consideration and to create awareness about the importance of wildlife, prevention of forest fire and the role of public in preventing fires, the Forest Department has been conducting street plays and conducting meetings at villages in the forest border to seek co-operation from them.

For the Mahashivaratri Jathra, devotees have already started arriving at the MM Hills since Feb. 18. The devotees have stayed put at the Hill and it is a tradition for the them to arrive at least a week before the Jathra. More than two lakh devotees are expected to take part in the Jathra Mahotsava this year.

The main worry is fire caused by carelessly thrown lit cigarettes and beedis. Along with this, the Forest personnel have to prevent plastic usage by the devotees. Forest personnel have started appealing devotees to shun plastic and also to not throw empty plastic covers in forest areas. They are distributing pamphlets so that people celebrate without harming the fragile habitat, V. Yedukondalu, DCF, Male Mahadeshwara Hill Wildlife Sanctuary told SOM.

Volunteers, Department personnel and the local Police will be deployed at all three entrances to the hillocks — Cauvery Wildlife Range, Tamil Nadu and Kollegal. Some start their journey from Mandya and Mysuru — a walk of around 70 km — and around 30 km of this journey is through the thickets.

This period is also crucial because elephants are known to roam the area due to the approaching dry season. People also feed monkeys, leading to conflicts. Devotees tend to cook in the forest, leading to garbage issues and also cause forest fires, officials say. After the celebrations, the Forest Department will need 200-300 volunteers to clean up MM Hills Range.