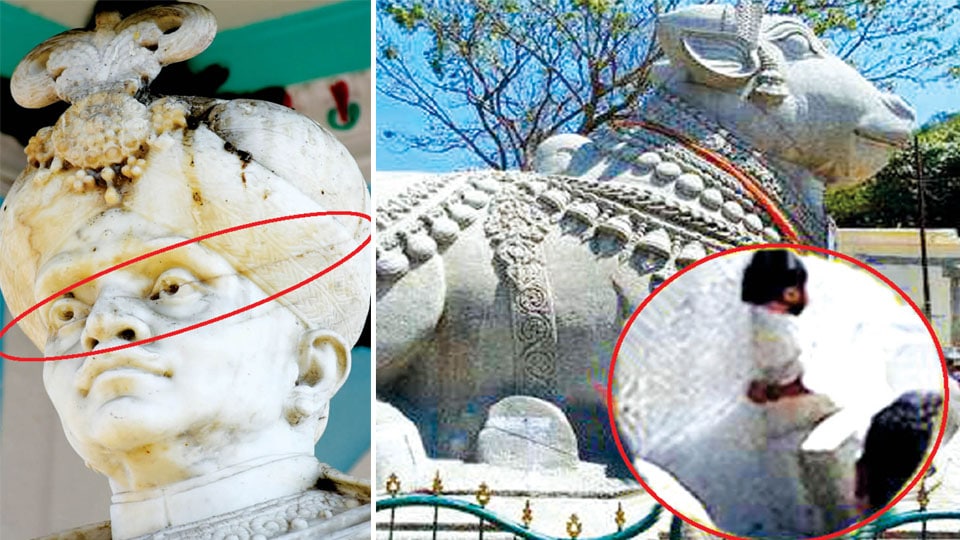 Mysore/Mysuru: Authorities from Mysuru City Corporation (MCC) have done little to protect Mysuru Maharaja Nalwadi Krishnaraja Wadiyar’s statue at K.R. Circle which is now cracked and faded, thanks to years of neglect.

Cracks have developed in the face and neck of the life-size statue. Nalwadi Krishnaraja Wadiyar was known for his development works and promotion of art and culture. The king’s marble statue was unveiled on October 16, 1952 by Sir M. Visvesvaraya, which was sculpted by R.P. Kamath from Mumbai.

Basavegowda of K.G. Koppal had constructed the structure around it using marble which is the main attraction on New Sayyaji Rao Road and D. Devaraj Urs Road Junction. The statue is a main attraction at K.R. Circle which houses several heritage structures. Though there was a fountain at the Circle, it was moved to Tipu Circle, near Mysuru Jail to accommodate the statue soon after the death of the Maharaja in 1940.

The statue, made out of marble, is placed in close proximity to the statue of  Tenth Chamaraja Wadiyar, the father of Nalwadi Krishnaraja Wadiyar, in front of the Mysore Palace.

Though the MCC has enhanced its beauty with illumination by placing ornamental plants around it and illuminating it during festive occasions like Dasara, the Civic body has not taken any steps to restore the statue.

It may be recalled here that in 2018, the damaged metal pendants in the turban of Nalwadi Krishnaraja Wadiyar’s Italian marble statue were replaced and the works were carried out by sculptor Arun Yogiraj.

There are some hairline cracks on the face and the sword. Climatic conditions also play a role since the statue was exposed to sunlight, wind and dust, said officials.

Member of Mysuru District Heritage Committee Prof. N.S. Rangaraju, who is also the Convener of Mysuru Chapter of Indian National Trust for Art and Cultural Heritage (INTACH) said that using acid to wash the statue and rough brushes may be a few reasons for the cracks. The statue should be washed in soap water without allowing it to percolate inside through gaps, he opined.

“It is not the job of the MCC to clean the statue as it should be assigned to archaeologists as they have expertise in handling such heritage structures. There are a lot of heritage structures and statues in Mysuru and if the Government releases Rs. 50 crore, we will take the responsibility of restoration,” he said.

Yesterday, a team of archaeologists visited the monolithic Nandi Statue atop the Chamundi Hill that had developed cracks due to weather vagaries and man-made Abhishekas. The celestial Bull (Nandi) rests midway along the road to Sri Chamundeshwari Temple and the monolithic statue is a major tourist attraction.

The statue, reckoned to be at least 350 years old, was sculpted during the period of Dodda Devaraja Wadiyar who ruled from 1659 to 1673 and is the only one of its kind in the State. The statue is 3,489 ft above main sea level.

READ ALSO  From toilet to tap?

Since many years, owing to rituals like Abhishekas that are regularly performed on the statue, layers of deposits of oil, dirt and dust had accumulated on the statue and it had turned black. Following the discovery of crack, the District Administration had formed a Committee to inspect the statue. Accordingly, Director of Department of Archaeology and Museums R. Gopal led the inspection team.