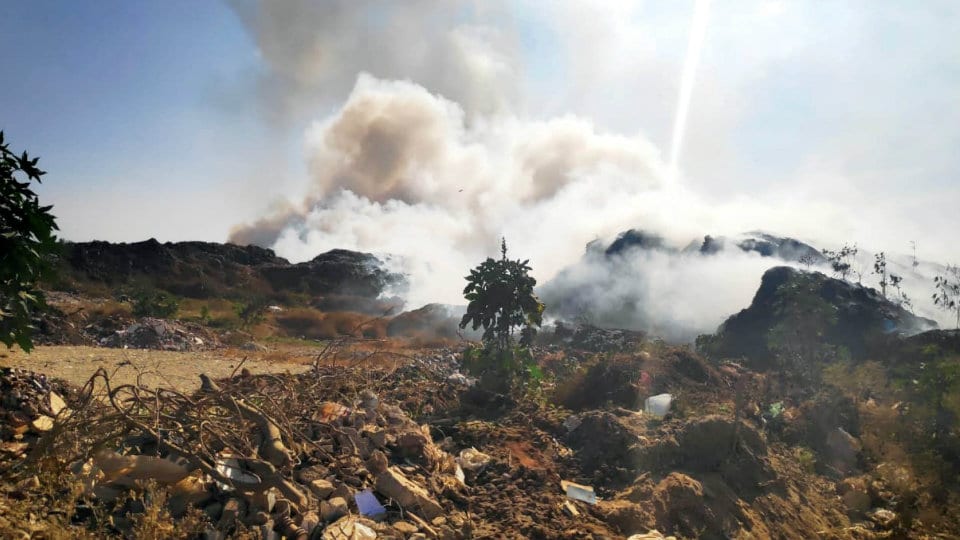 Mysore/Mysuru: About ten acres of landfill at the waste disposal plant in Vidyaranyapuram Sewage Farm caught fire on Tuesday afternoon and fire-fighters had a hard time dousing out the fire.

After receiving information about fire at the waste disposal plant, the Office of MLA  S.A. Ramdas alerted Saraswathipuram Fire Station at about 2.30 pm on Tuesday, following which the Fire personnel, led by Ganganayak, rushed to the spot. Later, seven vehicles and about 30 fire-fighters from Hebbal, Bannimantap and Nanjangud Fire Stations were also summoned.

Fire fighter Panditaradhya, told SOM that ten acres of landfill  caught fire and the fire had engulfed the waste plastic heaped alongside. The fire-fighting operations continued till late in the night amidst fears that three crocodiles which were believed to have taken shelter in the sewage water re-cycling plant could come out on to the road during night.

He said that while fire was being doused from one side, the other side was catching fire due to chemical reactions and added that waste was being removed from the landfill using an excavator machine to cool down the heat inside. Unable to bear the stench emanating from the plant, the fire fighters had to rest for a few minutes before continuing the fire-dousing operations, Panditaradhya added.

Finally, after about 30 hours of continuous operation, the fire was doused.

Meanwhile huge smoke that emanated following the fire, posed health hazard for the residents nearby, with many of them facing difficulty in breathing.