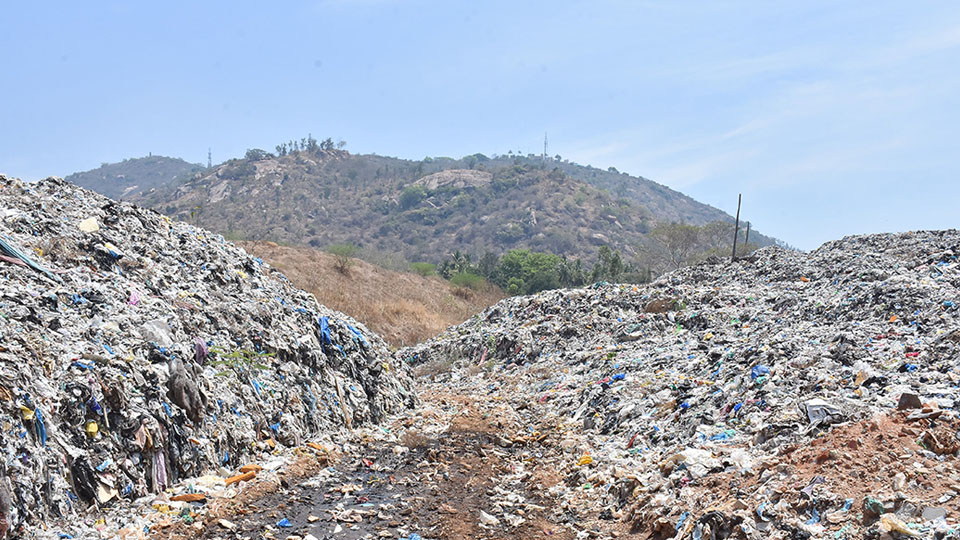 Mysore/Mysuru: In a big relief to nearly a lakh residents living around the Solid Waste Management Unit (Excel Plant) at Sewage Farm premises in Vidyaranyapuram, the Mysuru City Corporation (MCC) has finally called for tenders from global bidders to clear mounds of legacy waste that has piled up over the years, causing unbearable stench. Global tenders have been called to clear over two lakh tonnes of waste through biomining and the total estimated cost is Rs. 10.13 crore. The tender per se for biomining methods is Rs. 4.6 crore.

The tenders have been through Government’s e-procurement portal floated on Mar. 2 this year and a formal meeting regarding the tender will be held at the office of MCC Executive Engineer (West) on Mar. 29 at 11 am. The last date to submit the tender is Apr. 5 and the tenders will be opened on Apr. 6.

Living in the surroundings of Excel Plant has become a horrible experience for residents with undesirable smell emanating out of the plant 24×7. Residents of Vidyaranyapuram, Kanakagiri, J.P. Nagar, Gundu Rao Nagar and Vishweshwaranagar have been demanding the relocation of the plant for years.

Bioremediation is the best process to clear the waste. It is a process of treating contaminated soil and subsurface material, by altering environmental conditions to stimulate growth of micro-organisms and to degrade the target pollutants.

The tenders have been called to clear the legacy waste and funds have been allocated under 13, 14 and 15th financial grants. The tender has been divided into three parts – Rs. 4.6 crore for biomining methods, Rs. 2.16 crore for outsourcing vehicles for the biomining project like excavators, backhoe loaders, front-end loaders, tippers and tractors. The third part of the tender is worth Rs. 3.37 crore is to transport the Refuse-Derived Fuel (RDF) derived after the booming to cement factories.

The total value of the three tenders is Rs. 10.13 crore and the time-frame for the completion of the works is nine months, as per the tender specifications.

Though the proposal to clear the legacy waste had been approved by the Government, the project was caught in a quagmire. In 2020, a seven-member team headed by the then Mysuru Deputy Commissioner Abhiram G. Sankar and MCC Officers and elected representatives visited Nagpur to study the biomining project adopted by Zigma Company. The team had visited the plant at Bhandewadi village near Nagpur where Bioremediation technology is being used to process 10 lakh tonnes of legacy waste.

Once the legacy waste is cleared, an estimated 25 acres of land at Vidyaranyapuram can be reclaimed by the MCC. The company that bags the tender has the responsibility of segregation of the waste before processing.