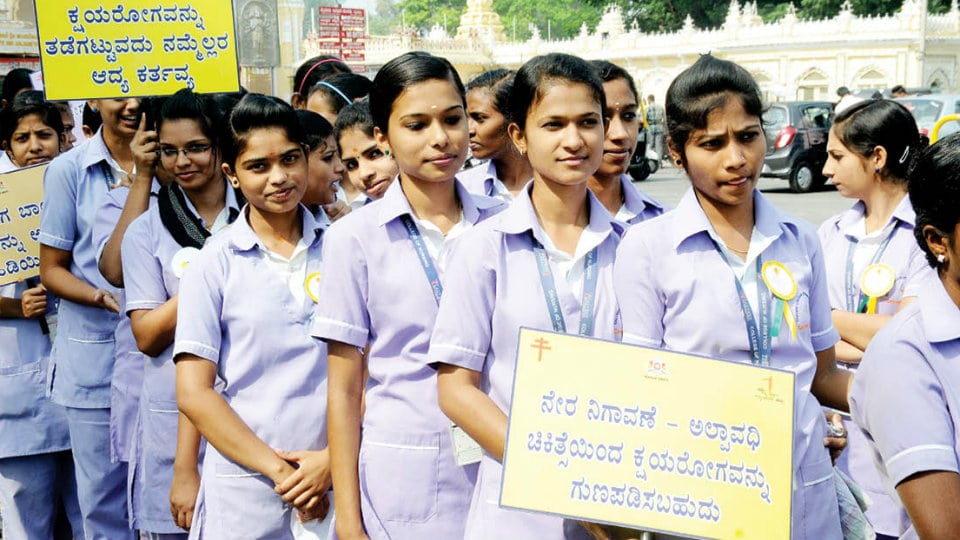 An awareness rally, organised by the District Administration in  association with ZP, District Health and Family Welfare Department, Ashodaya Samithi and several other organisations, marked World TB Day in city this morning.

The rally, with the theme ‘Unite to End TB. Leave No One Behind’ was flagged off by DC D. Randeep near Kote Anjaneyaswamy Temple.

Nearly 200 nursing students from various nursing colleges, holding placards with messages on the eradication of TB, took part in the rally, which passed through Ashoka Road, Nehru Circle and Irwin Road before culminating at District TB Control Centre office on Benki Nawab Street in Mandi Mohalla. Speaking after flagging off the rally, DC Randeep explained the salient features of revised National Tuberculosis (TB) Control Programme. Pointing out that India constitutes for 27 percent of TB patients across the world, Randeep said that 600 persons die of this deadly disease on an average daily. Expressing concern over the growing number of TB patients, the DC stressed on the need for organising wide-spread awareness programmes, especially in rural areas.