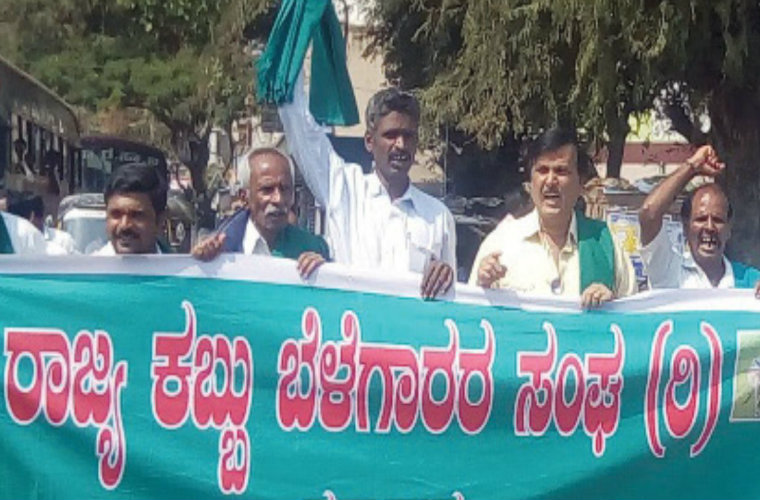 Traffic on the busy Mysuru-Nanjangud Road came to a halt for about half-an-hour as members of Karnataka State Sugarcane Growers Association and the Federation of Farmers Associations blocked the road at Hullahalli Circle and formed a human chain urging the Government for fulfilment of their various demands.

The protesters, led by Karnataka State Sugarcane Growers Association President Kurubur Shanthakumar, urged the Government to fix scientific price for sugarcane supplied to sugar factories and to provide compensation to farmers who lost their crops due to non availability of water among other demands.

Shanthakumar alleged that neither the Central Government nor the State Government was helping farmers who had suffered losses due to drought and urged the State Government to come to the help of farmers in Kabini Catchment Areas by providing Rs. 25,000 compensation per acre to those farmers whose paddy crops withered due to shortage of water, to fix Rs. 3,000 per tonne of sugarcane supplied to Bannari Amman Sugar Factory for the current year, to waive off loans taken by farmers at Nationalised Banks and to supply power to pump sets for 10 hours a day.

He threatened of staging a stir in front of the DC’s office on Feb. 14 if the District Administration failed to take action immediately.