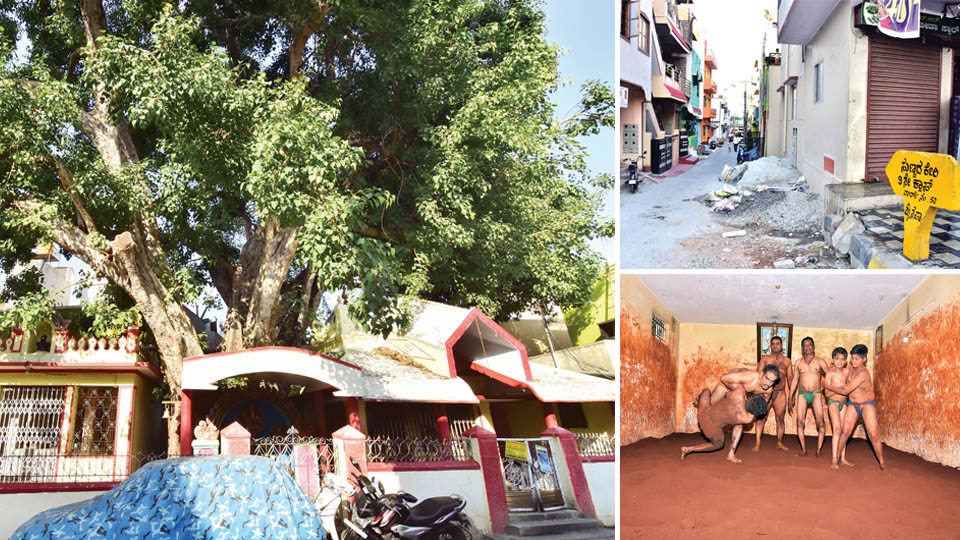 Amidst rapid urbanisation, several areas in Mysuru have been relegated to the pages of history but the cultural remnants of those areas are visible even now and one can find the heritage alive and kicking. Sunnadakeri is one such area that was in great demand for limestones when the construction industry was booming. In fact, limestones from this area were used to construct the present Mysore Palace. The reputation of the area was very high and the residents of Sunnadakeri take pride in claiming that they had supplied limestones to the Palace and even to small households from far and wide. Senior Journalist Gouri Satya takes a walk inside Sunnadakeri and demonstrates how Mysuru’s past still lives on there in this Weekend Star Supplement.

Sunnadakeri in K.R. Mohalla has some fascination for me. It is here I find the cultural past of Mysuru still in existence. No doubt, this Keri too has undergone some changes like any other old parts of Mysuru. That does not seem to have impacted the people living here much. They are keeping the old traditions and cultural practices alive.

Sunnadakeri is located in Krishnaraja Mohalla, adjacent to Khille Mohalla or Fort Mohalla. It is one of the central parts of Mysuru. Generally a ‘Keri’ refers to a street where inhabitants of a particular occupation lived earlier, though this is not the case now. Unlike other ‘Keris’, Sunnadakeri covers nearly a dozen cross roads and by-lanes, though called a ‘Keri’.

While in my earlier two articles, I had briefly mentioned how Mysuru expanded with the addition of Purams, Mohallas, Agraharas and Keris, in this article, I intend to highlight how the people in Sunnadakeri have retained the past cultural heritage of Mysuru. Attracted by this, I walk into its lanes and by-lanes once a way during my morning walks, to discover how the cultural past of our old city has survived. Every time I visit this Keri I find something new and interesting, meet some resident, who narrates something of interest to me.

Agraharas in Mysuru have lost much of their character of being the residential areas of priests and pundits, musicians and artistes. But, a few ‘Keris’ in the interior parts of the old city have retained their cultural identity to a significant extent, although people residing here are compelled to adopt themselves to the present day ways of life like in other parts of the city. It is not that old cultural traditions and practices have not taken a hit. Indeed, people in these Keris too are affected.

New constructions are coming up in place of the old country-tiled houses. Modern houses of bricks and cement have sprung up in place of ancestral houses. Traditional services which each caste group had specialised in each Keri are no longer available or practiced. They have given up their traditional occupation as there is no demand for them due to changing times and conditions.

Services like selling limestones, white-washing of houses, setting country tiles of the roof in order, replacing moth-eaten bamboo poles and broken tiles, cleaning of wells, bamboo work like weaving of mats etc., which the people in the Keris offered, are no longer in demand today. Yet one can find the essential core of Mysuru still enduring in some of the Keris. This is true of Sunnadakeri also.

Once famous for limestones

As the name itself indicates, Sunnadakeri was famous for ‘Sunna’ or limestones used for white-washing of houses and buildings. As white-washing was an annual feature prior to the advent of modern paints and varnishes, limestones were in good demand. People living in this ‘Keri’ were selling limestones in baskets near their houses and catering to the demand. House-holders bought limestones from them and availed their services to lime-wash their houses. Residents here take pride in claiming that they had supplied limestones for the construction of the present Palace during the early 1900s.

As I walk in the lanes and by-lanes of this old Keri, I come across at least a dozen Rama Mandiras, Gaddiges, small shrines of local deities like Yellamma, Masthamma, Renukamma, Chamundeshwari, Mahadeshwara and Lord Shani. Worship is conducted regularly in these temples and Rama Mandiras and processions and celebrations are held during festival days.

There are also sacred Banyans (Ashwatha) or Neem (Bevu) trees which are worshipped in a few of these old temples. Night-long Puranic dramas like Shani Mahatme or Rajavikrama are organised with much fanfare on festive days. Local residents turn Gods and Goddess. Besides these, I also come across a few Garadis, where wrestlers practice daily, in the mornings and in the evenings, with their traditional instruments.

A unique feature of Sunnadakeri is the harmonious relationship between Hindu and Muslim families. Muslim families have Hindu families as their neighbours — the former hold regular prayers in the old mosques of historical significance while the other sections carry on their daily routine. They have been living here in this model way since a century or two. People living here include wrestlers, folk artistes, Palace workers and those who serve the royal family during Dasara celebrations. Old-fashioned shacks continue to exist here.

The Kanchugarara Beedi or Street is dotted with some old structures of worship. The interior of a small cell displaying interesting objects of worship caught my attention during one such walks. When I stand there curiously, an elderly Jayamma, who was sitting at the entrance, tells me that it is the temple of Shakti Goddess Yellamma. She invites me into the single cell shrine and leads me to show the objects of worship.

“Over 70 years back, one K.R. Yallappa Rao was residing adjacent to the Neem tree you see behind this image of Yellamma. In his dream, a Goddess told him one day, ‘I am Yellamma. I am in this Neem tree. Worship me and seek my blessings.’ So saying, the Goddess disappeared. Accordingly, he brought the image of Yellamma, which was lying discarded in the opposite site, and built this temple, placing the Yellamma image in front of this Neem tree,” she narrates, pointing to the photo of her father, Yallappa Rao, on the wall.

Leading me through the narrow passage around the tree, she identifies the limbs of the Goddess in the Neem tree, including her spread-out saree and a section resembling a five-hooded serpent. “Students and foreigners interested in social and religious practices visit our temple,” she adds.

“On an auspicious day in February, we take out a procession of Yellamma, our home deity, and hold celebration for four days every year. After the demise of my father, my husband was worshipping the Goddess as Yallappa had no sons. After my husband’s death, I am continuing with the worship,” she says, offering me Theertha, in a copper spoon.

Close to Yellamma Temple, there is a Renukamma Temple, another local deity. It is also a single cell shrine with a Renukamma image, another Shakti Goddess. Both Yellamma and Renukamma are cult Goddesses having Puranic background. Two prominent places of daily worship in Sunnadakeri are Gaddiges (tombs) of Siddappaji.

The Siddappaji Gaddige on the Kanchugarara Beedi is inside an old enclosure. Interesting objects of worship in the three cells of the temple attract me. The interiors are fitted with glazed tiles like most of the shrines in this area, robbing their rustic look.

Priest Arunkumar explains, “Originally, there was a small Gaddige opposite the present temple. The image was shifted to this place and a three-cell structure was constructed in 1968. The two other cells on either side of the Gaddige have the images of Gangadevi and Ganapathy. Gangadevi is the Goddess of Gangamatastha community. They are fishermen by profession and live in considerable numbers in this area. The Ashwatha and Neem trees standing within the temple enclosure have grown together looking like a single tree. This is unique here. You see a similar tree only in the Palace fort,” he says.

The other Gaddige of Siddappaji, which is close by, is comparatively small. “The original Gaddige of this holy person is at Gaddige on H.D. Kote Road. A small sacred part of it was brought here by the Nayaka community members, who live in good numbers here. They have built this temple,” says the priest.

Adjacent to this Gaddige is a small temple of Goddess Chamundeshwari. The priest says famous sculptor ‘Shilpi’ Siddalingaswamy’s son has executed this beautiful image. Members of the Mysore royal family visit the two temples regularly. Late Maharaja Jayachamaraja Wadiyar was also visiting the temple to offer prayers, he adds. At the rear side of the Gaddige is a shrine of Lord Shani, where some old pictures of wrestlers are exhibited on the walls.

At the end of the same road, there is a single-cell shrine of Masthamma. Masthamma and Maramma are the twin Goddesses of small-pox and cholera. The two deities were being worshipped during the outbreak of small pox and cholera. The two pestilences were common in these congested and unhygienic areas and were taking a heavy toll. Rural folk worshipped the two Goddesses by carrying ‘Thambittu’ and Neem leaves to appease them. This tradition is being continued by those living in and around this area now also. There are at least a dozen Rama Mandiras in this Keri of small lanes. On the Kanchugarara Beedi, there are two Rama Mandiras called Chikka Rama Mandira and Dodda Rama Mandira. Dodda Rama Mandira was built first. It is over seven decades old and is being managed by a committee of Raju Kshatriya community members living in this area.

The priest draws my attention to an old photo on the wall and says, “This group photo was taken in 1914, when the procession of Sri Rama was being taken in front of the then Palace Office Building, which presently houses the Departments of Agriculture and Co-operation, near the Palace.”

“The Palace Office staff used to offer worship when the procession was taken that side. To mark it, this photo was taken. It shows all the members of the committee who participated in the procession,” he says, adding “the annual procession of Sri Rama is conducted now also in the month of April, during Ramotsava celebrations. Paintings of noted artist Raja Ravi Varma were displayed on the walls here, but they were all stolen,” he laments as I take leave of him.

It is in these lanes and by-lanes in the interior parts of the old city, I find the cultural heritage of Mysuru still alive. People living here since decades and years have sustained the old world charm of Mysuru, despite the influence of modern lifestyles. For me, a walk in these Keris is always rewarding.