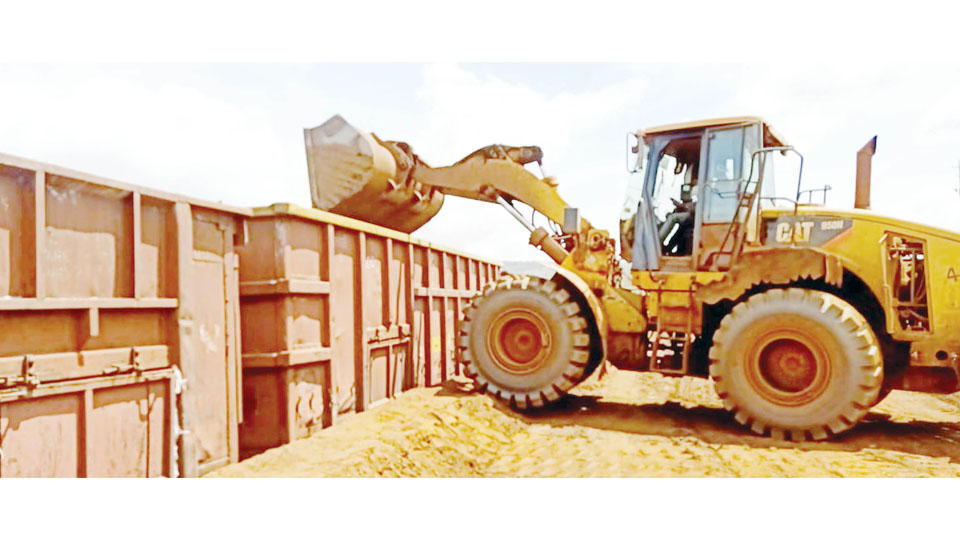 Mysore/Mysuru: Despite the many challenges posed by Covid-19, South Western Railway (SWR), Mysuru Division, recorded the highest ever freight revenue of Rs. 688.18 crore in 2021-22, an impressive growth of 54.58% in comparison to last year and 22.60% over the target fixed for the Division.

The tonnage too, at 9.09 million tonnes, surged 32.24% over last year. Interestingly, freight revenue from transportation of iron ore alone stood at a whopping Rs.503 crore, surpassing the entire freight revenue of FY 2020-21.

Backed by an aggressive and sustained marketing strategy of the Business Development Unit (BDU) of the Division, maize traffic has been recaptured by the Railways with 123 rakes having been despatched netting revenue of Rs. 32.50 crore.

SWR Mysuru Division is in the process of diversifying its freight basket seeing automobiles as a potential space to tap in. In the current fiscal, as many as 20.5 rakes, comprising 22,500 two-wheelers of the TVS Group were despatched from Nanjangud Town Railway Station to North and North-Eastern parts of the country fetching revenue of Rs.4 crore. The traditional commodities loaded from Mysuru Division include iron ore, petroleum products, food grains, sugar, cement, ballast and others.

In the parcel segment also, the Division achieved the highest ever revenue of Rs.9.60 crore. A total of 17,475 tonnes of parcels was lifted in the current year registering over 100% increase as against 8,534 tonnes recorded in 2020-21. Consistent with the policy of the Ministry of Railways to strengthen the agriculture sector to mitigate the difficulties of the farming community by transporting perishables, including fruits and vegetables,  SWR Mysuru Division despatched nearly 20,000 bags of onion to North and North-Eastern States and the revenue earned is Rs. 52 lakh. In addition to it, 16 parcel cargo express trains were run from Nanjangud Town carrying Nestle products, tyres and others bringing in revenue of Rs. 2 crore.

With this the gross revenue of the Division from Freight, Parcels and Passenger traffic stands at Rs. 902 crore.

Apart from this, in punctuality the Mysuru Division has performed the best in SWR by achieving a punctuality of 99.14% during 2021-22 in running Mail/ Express trains compared to 97.91% during last year.

Notwithstanding the negative fallout of the pandemic, Mysuru Division has not only been able to undertake a record freight business in the current year, but also kept the supply chains unbroken through seamless movement of goods across its network, according to a press release from Dr. Manjunath Kanamadi, Sr. Divisional Commercial Manager and Sr. PRO.