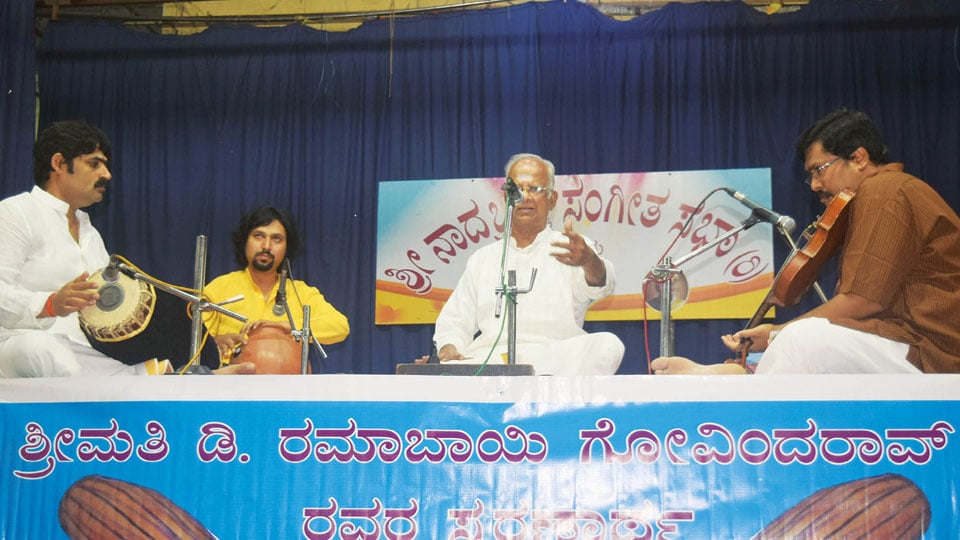 Veteran musician T.V. Shankarnarayan (TVS) gave a vocal concert at Sri Nadabrahma Sangeetha Sabha on the 17th of November. He was supported on violin by Mathur Srinidhi, on mridanga by Tumkur B. Ravishankar and on ghata by Sharath Kaushik.

This 74-year-young musician is known for his energetic music. There wasn’t a single dull moment in his concert. The shruti was stable and perfect throughout the concert and at no point of time was the energy seen coming down even for a second. His style, which he has imbibed from his uncle Madurai Mani Iyer is enthralling and did not fail to appeal the audience on this day too.

The senior musician started the concert with a shloka in Nata on Lord Ganesha ‘Gajananam Bhoota Ganadi Sevitam’ leading onto ‘Jaya Jaya Swamin Jaya Jaya’ by Narayana Teerthar followed by vigorous swaras. TVS always makes it a point to render at least one devaranama in his concerts in Karnataka. This day his choice was ‘Ee Pariya Sobagava Devarali naa kane’, which was tuned in ragamalike (Saranga, Hindola) unlike Hamsanandi in which it is usually sung.

Gawri Manohari was dealt with in detail. After an elaborate alapana, Mysore Vasudevacharya’s known composition ‘Vara Lakshmi Namostute’ was sung at leisure with his signature style of swaras at ‘r’. After a crisp ‘Sarasa Sama Dana Bheda’ (Tyagaraja, Kapi Narayani) with also a neraval at ‘hitavu matalento’ and Swati Tirunal’s ‘Smara Janaka Shubha Charita’ in Behag, the vocalist took the main item of the evening, Kalyani, in which after a very chaste alapana he chose to sing ‘Eta Vunnara’ by Tyagaraja, which he interestingly began with the anupallavi. At ‘Shiva Madhava Brahmadula’ a neraval was also built followed by dancing swaras.

On request, the artiste also rendered an RTP in short — the very popular pallavi of Madurai Mani Iyer ‘Parimala Rangapate’, set to Trishra Triputa tala in Ateeta Graha, which was coloured with ragamalika swaras in Ranjani and Sindhu Bhairavi.

The post-tani part included a Tamil Viruttam on Lord Rama. TVS was emotional when he took the name of Raama in various forms as Damodara, Hari, Krishna, Mukunda, Govinda,  Madhava, Muraari and so on in Tillang leading onto Purandara Dasa’s ‘Raama Raama Raama Seeta Raama Eniiro,’ which was also received with great applause. Srinidhi was quick to grasp and his anticipation was great. Ravishankar and Sharath Kaushik enjoyed the senior musician’s singing even as they                 accompanied, also offering a lively taniyavartanam for the Kalyani piece.

The vocalist rendered all the compositions with no reference to any book or chit, which is commendable. The unflinching enthusiasm of the senior artiste is exemplary.