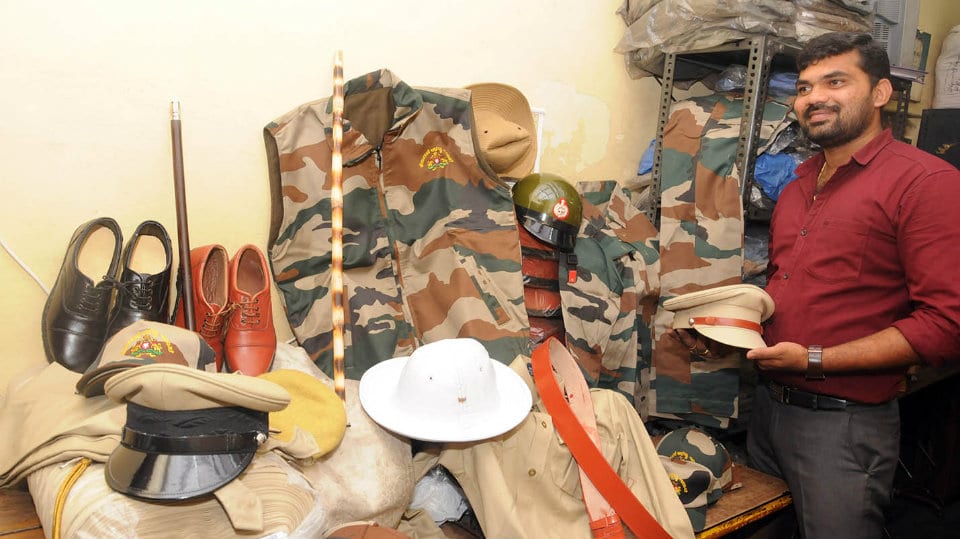 Tailor-made for Men in Khaki

Most people can identify a Police Officer by the official uniform. When citizens on a busy street are in need of help, they scan the crowds of pedestrians looking for the distinctive uniform of a Police Officer. Criminals usually curb their unlawful behaviour when they spot a uniformed Police Officer.

What is so special about a uniform that is usually hot and uncomfortable to wear? The crisp uniform of the Police Officer conveys power and authority. When a Police Officer puts on his or her uniform the Officer is perceived in a very different way by the public. He or she is viewed as embodying each person’s stereotypes about all Police Officers.

Research suggests that clothing has a powerful impact on how people are perceived and this goes for the Police Officers as well. The uniform has been found to have a profound psychological impact on those who view it. Research also tells that even slight alterations to the style of the uniform will change how citizens will perceive the Officer.

And to make the uniform a perfect piece of clothing, there are exclusive tailors in Namma Mysuru who specially cater to the uniformed lot. While one can find at least a couple of tailors on any given stretch of a road, one can rarely find tailors who only stitch Police, Forest and Military uniforms. And these tailors are stitching uniforms since more than 80 years.

These exclusive shops are Mahatma Tailoring Shop on Benki Nawab Street on Irwin Road and Bahadur Store on Ashoka Road. Both have been supplying uniforms and all other accessories to men in uniforms from the days of Maharajas.

They also supply accessories like caps, shoes, socks, belts, badges, sweaters, lathis, buttons, gloves, name plates, T-shirts and jackets. Shoes are also sold after getting them manufactured from cobblers who are outsourced by the shops after taking foot measurements. 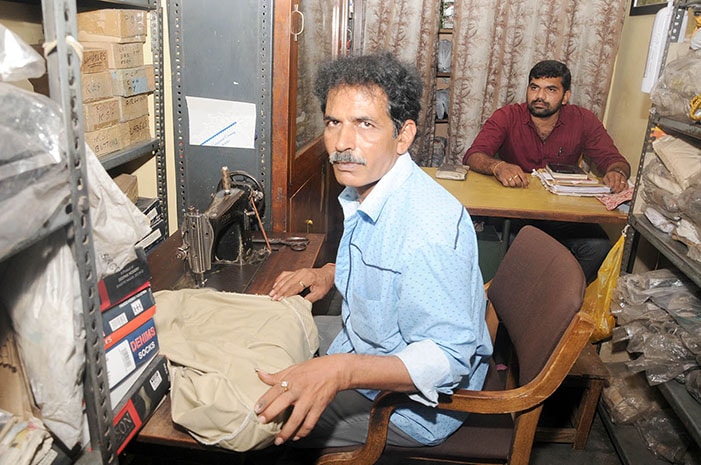 One of main specialities of Mahatma Tailoring Shop is that it prepares uniforms to Mahouts and Kavadis who take care of Dasara Elephants. This shop has been supplying uniforms to them since the last 30 years. Bahadur Store has earned the recognition for designing and making dresses to erstwhile Maharajas of Mysuru.

Other major customers for these shops are outgoing students of Police Staff Training Academy, Excise, Fire and Emergency, Forest Staff Training Academy and other training places. Also they sell uniforms to school and college students of Vidyavardhaka, Ramakrishna Ashrama, Bharatiya Vidya Bhavan, Mahajana and Maharani’s. Even women Police Constables visit these shops in large numbers to get their uniforms stitched.

Fire and Emergency Services Department staff and Home Guards, non-government organisations involved in protection of forests have also been ordering uniforms and other accessories to distribute them to Forest Department staff at Bandipur and Nagarahole Tiger Reserves. 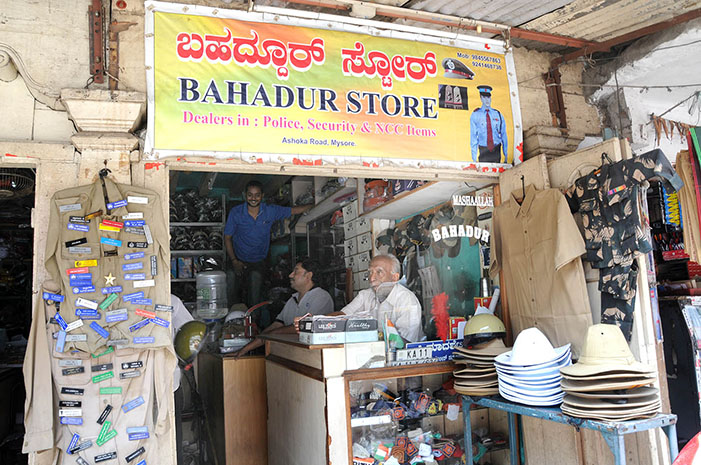 Bahadur Store on Ashoka Road that also deals with uniforms.

As many as 12 professional tailors have been working to prepare these uniforms at Mahatma Tailoring Shop. They work extra hours whenever there will be bulk orders. Otherwise too, department personnel visit the outlet in person to place orders in case their uniforms are damaged and if they need extra.

Uniforms and other accessories of all department personnel are available here ranging from Rs. 1,000 to Rs. 5,000 for a set including accessories. Though there are some shops to supply uniforms, these shops have loyal clientele who pass on the legacy to younger generations.  Interestingly, Police, Forest Department and Military personnel working in various wings of Indian Army make beeline to place orders. 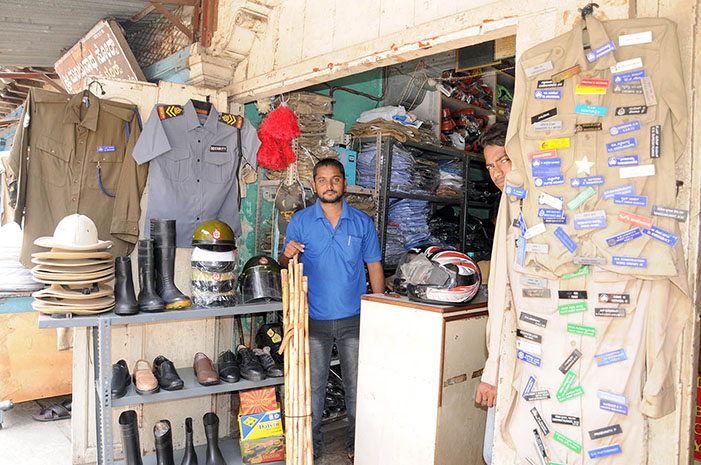 Uniforms and accessories are the speciality of Bahadur Store.

“I have been purchasing uniforms for the past ten years from this shop. I came all the way from Channapattana Police Training Academy to order uniforms. I heard from my seniors that this shop has retained work quality and has earned a good name in department circles,” said Chennabasappa, a Police Constable.

Speaking to Star of Mysore, Roopesh who owns Mahatma Tailoring Shop said that his grandfather N.S. Swamy, a retired Army soldier who worked in Pune Battalion had started this shop on Benki Nawab Street in 1947 after his retirement exclusively to cater to uniforms. Roopesh said that he has been continuing this business after his father passed away. 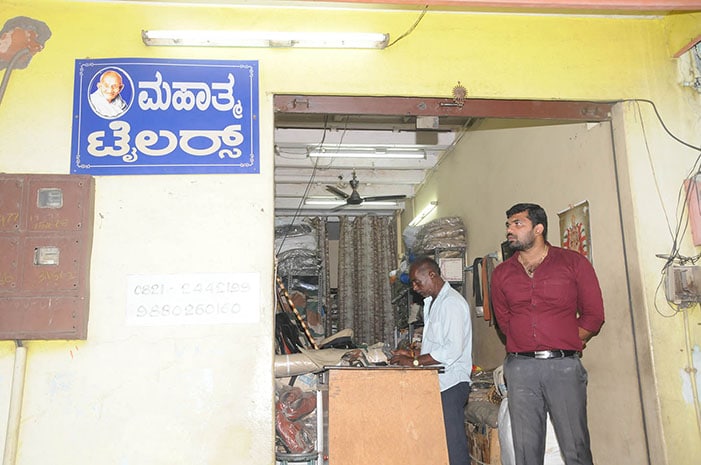 Roopesh at his Mahatma Tailoring Shop.

He said that he purchases raw materials to prepare uniforms from Ludhiana in Punjab and New Delhi, famous for selling quality khaki and Army clothes at good prices.

Owners of Bahadur Store Muddasir and Tanveer said that their father Anwar Khan Bahadur opened this shop. “Our father stitched uniforms for Mysore Palace soldiers and designed dresses for Nalwadi Krishnaraja Wadiyar. Later, he extended his business of preparing uniforms for Police, Army soldiers and others,” they said. 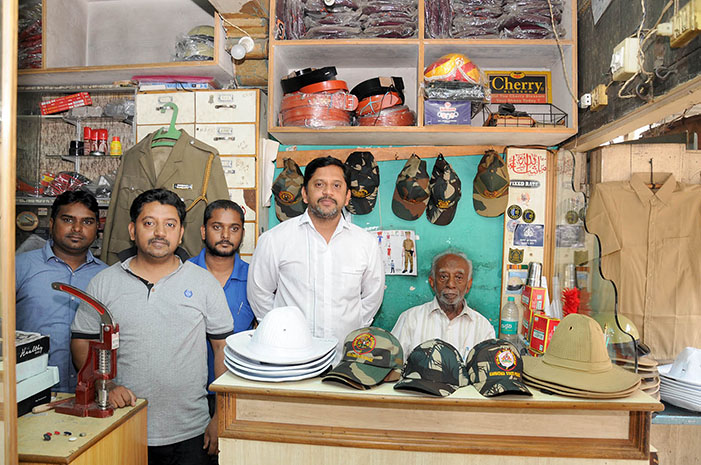 Owners Muddasir and Tanveer with their father Anwar Khan Bahadur and staff at Bahadur Store. Uniforms and accessories are their speciality.

No sale of uniforms to public

Both shop owners said that they would sell uniforms only to Department personnel but not to public as they might misuse them for illegal activities after wearing Indian Army fatigues, impersonating as Police and other Department staff.

“Moreover, there are reports of terrorists infiltrating into India after crossing the borders using Police uniforms and military fatigues to carry out terror attacks on our soil. So we are careful. The identity of the customer who comes to us seeking uniforms is carefully established and ascertained before taking orders,” they say.