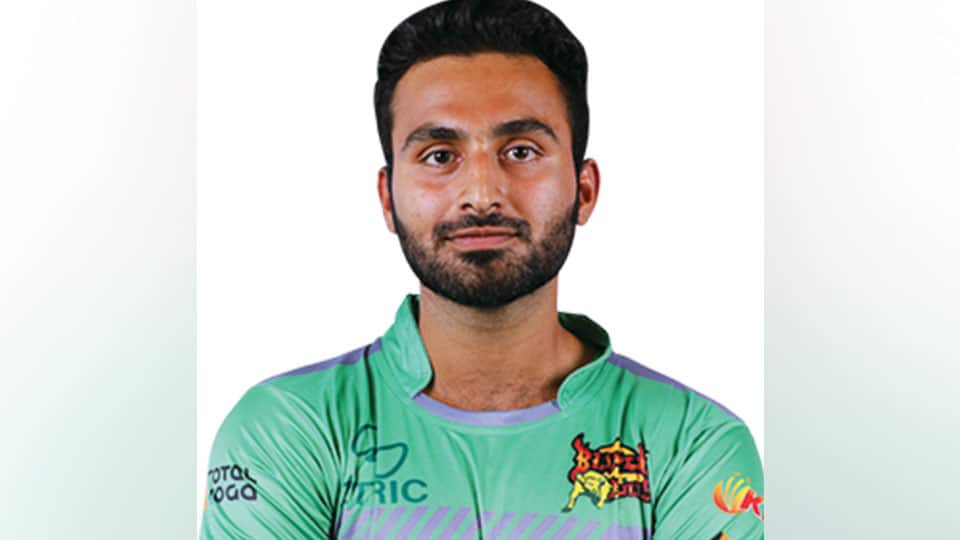 Many youngsters have taken up cricket as their career. Mysuru region also has its share of producing talented cricketers who have gone on to play higher level of cricket. On these lines is Mandya-born youngster M.G. Naveen who has been performing consistently with the bat and the ball in the recent Tournaments conducted by KSCA. His performances in the recently concluded KPL-2018 is an eye opener. He played an important role in Bijapur Bulls title triumph. Naveen, an all-rounder, won the ‘Man of the Match’ award for his performance. He is the ‘Star This Week.’

Naveen’s 31-ball 43 and his 47-run opening wicket stand with skipper Bharath Chipli (18) gave their team a decent start. Naveen totally scored 159 runs in six matches for Bulls and took six wickets for his team in the Tournament. In the semi-finals against Hubli Tigers, Naveen took two for 36 with the ball and remained not out with a well compiled 62n.o. and helped his team register a nine-wicket win.

Naveen is presently employed with Canara Bank, and he has represented Karnataka in senior team in the one-day tourneys. He also played in the Dr. (Capt.) K. Thimmappiah Memorial All India Cricket Tournament 2018 and fared well. Naveen played for the Bijapur Bulls team for the KPL-2016. 24-year-old Naveen plays for RBNCC ‘A’ in the KSCA Mysuru Zone 1st Division League. He represents Swastic Union CC in the KSCA Bengaluru League in the Group I, 1st Division.

Naveen is a top order batsman and a medium-pacer and is a utility all-rounder. He has represented Karnataka in the U-23, U-19, U-16 levels and has been performing well.

Naveen also represented Mangalore University in the South Zone Inter-University Championships 2015-16. He represented Mysuru Warriors in KPL-2015 and in Mangalore Premier League won ‘Best Player of the Tournament’ award for his all-round performance.

He intends to work hard with his batting, bowling and fitness levels and aims to represent the State in the senior level in the days to come.