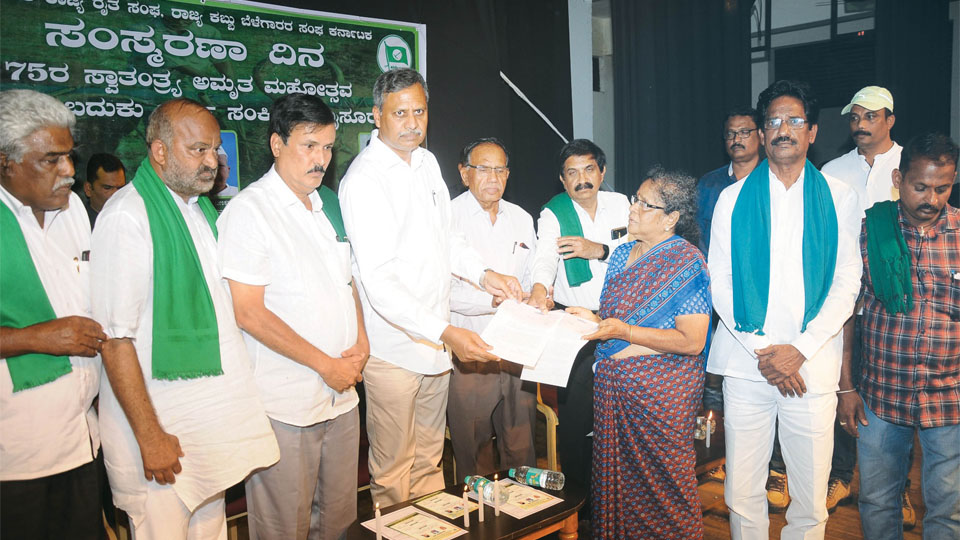 Vimal Kumar from T. Narasipur died while on a study tour to Telangana

Vimal Kumar, 40, hails from T. Narasipur and he died while on a study tour to Telangana with farmers from Mysuru and other districts of Karnataka. The family was handed over a cheque of Rs. 10 lakh under Raitha Bandhu, a scheme launched by the Telangana Government.

The cheque was handed over by the Telangana Raitha Bandhu President Pallam Rajeshwar Reddy, who is also Telangana MLC, to the mother of the farmer, Tangamani, at a programme at Kalamandira yesterday.

The Association had organised a seminar ‘Krushikara Baduku’ on the journey and life of farmers on the occasion of 75 years of Independence. The event also remembered the contributions of former Union Minister M.S. Gurupadaswamy, former Assembly Speaker B.G. Banakar and farmers’ leader Prof. M.D. Nanjundaswamy.

According to Shanthakumar, a delegation of farmers’ organisations was on the study tour of Telangana to learn about the irrigation projects and other pro-farmer initiatives implemented by the Telangana Government, on Feb. 14 and 15.

“Vimal Kumar died of a heart attack while addressing a press meeting regarding the tour of the team in Hyderabad. When the issue was brought to the notice of Telangana Chief Minister K. Chandrashekar Rao, he directed the Ministers and officials to provide financial assistance to his next of kin Vimal Kumar,” he said.

Addressing the event, Pallam Rajeshwar Reddy said the farming community in Telangana was benefiting immensely due to the effective implementation of ‘Raitha Bandhu’ and ‘Raitha Bima’, 24-hour free power supply and other welfare programmes by the State Government.

Karnataka farmers, who learnt about the Telangana Government’s schemes, wanted similar schemes to be implemented in respective States for the welfare of farming community. South India Farmers Association President K. Narasimha Naidu and other farmer leaders also participated in the programme.