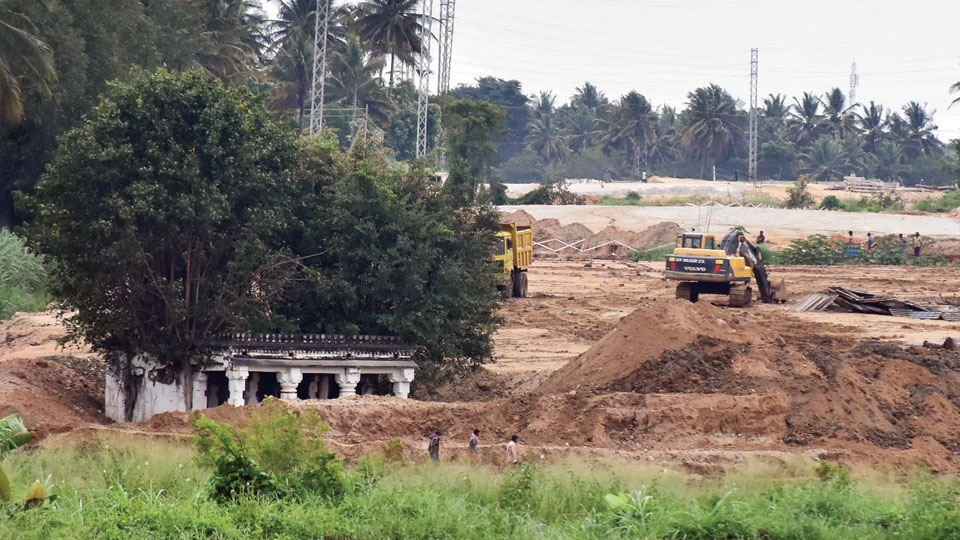 Mysore/Mysuru: After the 12th Century Venugopalaswamy Temple at Kannambadi village was relocated to Hosa Kannambadi near Krishna Raja Sagara (KRS) Dam following its submersion under Dam waters, now it is the turn of 15th Century Gadde Ranganathaswamy Temple on the Mysuru-Bengaluru 10-lane Highway to be relocated to a safer place.

The 500-year-old Temple, built in 15th or 16th Century has 12 large stone pillars. While the pillars in the front portion are round shaped, the rest are square shaped. The idol of the presiding deity Gadde Ranganathaswamy is installed in the sanctum sanctorum at a height of about 3½ feet.

Archaeology report: The Department of Archaeology, Museums and Heritage had recently submitted a report to the Mandya District Administration stating that the precincts surrounding the Gadde Ranganathaswamy Temple was being used as dumping yard for debris. The report stated that though the Temple was not among the list of protected monuments, it was a remarkable structure with a rich heritage and needs to be conserved.

The Temple had resurfaced when the Dam water receded drastically and seeing the architectural beauty of the temple, Khoday Foundation relocated the building block-by-block at a cost of Rs. 2.5 crore.

More than 200 workers and machines removed the carved stones and pillars of the temple, after marking each one of them.

Conservation efforts: According to officials from the Dept. of Archaeology, the Gadde Ranganathaswamy Temple could easily be relocated as it was made of stones and pillars. The stones and pillars can be dismantled and shifted elsewhere.

The Mandya District Administration is coordinating with NHAI and officials from the Department of Archaeology to relocate the heritage structure to conserve it for future generations.

Officials said that the Temple relocation works will not delay the Highway works. The relocation will be supervised by Archaeology officials.

It may be recalled here that the 18th century Tipu Armoury weighing 1,050-tonnes, also in Srirangapatna, was translocated in 2017 to pave way for the double-tracking work of the Mysuru-Bengaluru Railway line.